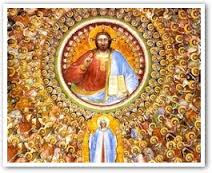 Luke’s story of Jesus consistently puts forth a reversal of values, which continues on into his second volume, The Acts of the Apostles, where the followers of Jesus are known as “the people who turn the world upside down” (Acts 17:6).

1st Reading: Daniel 7:1-3, 15-18
The Book of Daniel is set in Babylon during the time when most Jews were living there in exile.  It is apocalyptic literature, which means it uses heavily symbolic language, offering visions of the turning of the world from tribulation to peace.  Daniel 7 is one of four extended visions in the book.  It is a vision of the passing away of the kingdoms of this world to make room for the kingdom of God.  The four beasts are mostly likely the Babylonians, the Medes, the Persians, and the Greeks.  This is an All Saints’ Day reading because of the last line.  Those who have remained faithful (“the holy ones”) will have authority in God’s kingdom. In fact, they are always living in the true and eternal kingdom.
7:1 In the first year of King Belshazzar of Babylon, Daniel had a dream and visions of his head as he lay in bed. Then he wrote down the dream:  2 I, Daniel, saw in my vision by night the four winds of heaven stirring up the great sea, 3 and four great beasts came up out of the sea, different from one another. 15 As for me, Daniel, my spirit was troubled within me, and the visions of my head terrified me. 16 I approached one of the attendants to ask him the truth concerning all this. So he said that he would disclose to me the interpretation of the matter: 17 “As for these four great beasts, four kings shall arise out of the earth. 18 But the holy ones of the Most High shall receive the kingdom and possess the kingdom forever—forever and ever.”

Psalm 149
The final five psalms form a doxology to the entire book. The next to last psalm is a song to accompany a festive dance celebrating God’s victory and his pleasure in the people who belong to him. It praises God both for his creative power and his intervention in the history of his people. “Hallelujah” bookends each of these ending psalms, a Hebrew word that means “Praise the Lord!”

1 Hallelujah!
Sing to the Lord a new song; *
sing his praise in the congregation of the faithful.
2 Let rejoice in his Maker; *
let the children of Zion be joyful in their King.
3 Let them praise his Name in the dance; *
let them sing praise to him with timbrel and harp.
4 For the Lord takes pleasure in his people *
and adorns the poor with victory.
5 Let the faithful rejoice in triumph; *
let them be joyful on their beds.
6 Let the praises of God be in their throat *
and a two-edged sword in their hand;
7 To wreak vengeance on the nations *
and punishment on the peoples;
8 To bind their kings in chains *
and their nobles with links of iron;
9 To inflict on them the judgment decreed; *
this is glory for all his faithful people.
Hallelujah!

2nd Reading: Ephesians 1:11-23
This reading begins with an assertion that we share in Christ’s inheritance.  This is so because of our common seal of the Holy Spirit (the baptismal imagery is quite intentional).  Those so sealed are called “saints,” hagioi in Greek, “the holy ones.”  Paul did not understand the saints to be extraordinary, but the ordinary people of God, bound together in space and time by the hope to which we are called and the body into which they are assembled (the Greek word translated church—ecclesia—literally means “assembly”). The saints and the church were synonymous for Paul.

1:11 In Christ we have also obtained an inheritance, having been destined according to the purpose of him who accomplishes all things according to his counsel and will, 12 so that we, who were the first to set our hope on Christ, might live for the praise of his glory. 13 In him you also, when you had heard the word of truth, the gospel of your salvation, and had believed in him, were marked with the seal of the promised Holy Spirit; 14 this is the pledge of our inheritance toward redemption as God’s own people, to the praise of his glory. 15 I have heard of your faith in the Lord Jesus and your love toward all the saints, and for this reason 16 I do not cease to give thanks for you as I remember you in my prayers. 17 I pray that the God of our Lord Jesus Christ, the Father of glory, may give you a spirit of wisdom and revelation as you come to know him, 18 so that, with the eyes of your heart enlightened, you may know what is the hope to which he has called you, what are the riches of his glorious inheritance among the saints, 19 and what is the immeasurable greatness of his power for us who believe, according to the working of his great power. 20 God put this power to work in Christ when he raised him from the dead and seated him at his right hand in the heavenly places, 21 far above all rule and authority and power and dominion, and above every name that is named, not only in this age but also in the age to come. 22 And he has put all things under his feet and has made him the head over all things for the church, 23 which is his body, the fullness of him who fills all in all.

Gospel Reading: Luke 6:20-31
Luke’s story of Jesus consistently puts forth a reversal of values, which continues on into his second volume, The Acts of the Apostles, where the followers of Jesus are known as “the people who turn the world upside down” (Acts 17:6).  Luke’s beatitudes are very much in this tradition.  They are briefer, and less spiritualized, than the more familiar set from Matthew, and they include “woes,” which Matthew does not.  Both writers, however, mean by them to paint a picture of the reign of God.  The passage ends with “the Golden Rule,” here used not as a universal declaration, but as how one should relate to one’s enemies. This way of relating is one of the defining values of followers of Jesus.

The Scripture quotations are from the New Revised Standard Version Bible, copyright © 1989 by the Division of Christian Education of the National Council of Churches of Christ in the U.S.A. The translation of the Psalm is from The Book of Common Prayer.  Commentaries are copyright © 2019 Epiphany Esources, 67 E. Main St., Hornell, NY  14843, www.EpiphanyEsources.com. All rights reserved.  Permission is given to copy for group study. Bulletin inserts are available. For more information, go to our website.

Posted by The Rev Michael W Hopkins at 4:29 PM