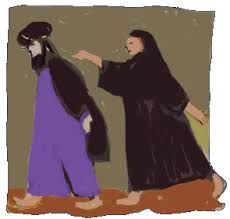 One of the more humorous of Jesus’ parables has the very serious message of persistence in prayer, and the admonition not to lose heart.

1st Reading (Track 1):  Jeremiah 31:27-34
Jeremiah 30:1—33:26 is often called the “Book of Consolation” (or “Comfort”).  Its primary purpose is stated in 30:2-3:  “Write in a book…the days are surely coming…when I will restore the fortunes of my people…”  Note that the verbs used in verse 28 correspond to those used at the beginning of the book (1:10), with the addition “bring evil.” They are brought up again to say that the negative promises have come to pass; it is now time for the positive:  to build and to plant. Jeremiah cites what must have been a popular saying about multi-generational responsibility. It is declared false. Verses 31-34 have a history in Christian usage, identifying the “new covenant of Jesus” with the new covenant spoken of here. The text itself seeks to proclaim a renewed relationship with the people of God brought about by their homecoming, and the forgiveness of the Lord.

31:27 The days are surely coming, says the Lord, when I will sow the house of Israel and the house of Judah with the seed of humans and the seed of animals. 28 And just as I have watched over them to pluck up and break down, to overthrow, destroy, and bring evil, so I will watch over them to build and to plant, says the Lord. 29 In those days they shall no longer say: “The parents have eaten sour grapes, and the children’s teeth are set on edge.” 30 But all shall die for their own sins; the teeth of everyone who eats sour grapes shall be set on edge. 31 The days are surely coming, says the Lord, when I will make a new covenant with the house of Israel and the house of Judah. 32 It will not be like the covenant that I made with their ancestors when I took them by the hand to bring them out of the land of Egypt—a covenant that they broke, though I was their husband, says the Lord. 33 But this is the covenant that I will make with the house of Israel after those days, says the Lord: I will put my law within them, and I will write it on their hearts; and I will be their God, and they shall be my people. 34 No longer shall they teach one another, or say to each other, “Know the Lord,” for they shall all know me, from the least of them to the greatest, says the Lord; for I will forgive their iniquity, and remember their sin no more.

Psalm 119:97-104 (Track 1)
Psalm 119, by far the longest of the psalms, is an acrostic poem with every subsequent eight verses begun by a subsequent letter of the Hebrew alphabet. It is a masterful meditation on the law, in the spirit of Jeremiah’s “new covenant.” This is the law as relationship with God. We have the section whose lines begin with the letter ס, Mem. Verse 103 recalls Psalm 19:10, whose latter part could perhaps be considered the short version of Psalm 119.

97 Oh, how I love your law! *
all the day long it is in my mind.
98 Your commandment has made me wiser than my enemies, *
and it is always with me.
99 I have more understanding than all my teachers, *
for your decrees are my study.
100 I am wiser than the elders, *
because I observe your commandments.
101 I restrain my feet from every evil way, *
that I may keep your word.
102 I do not shrink from your judgments, *
because you yourself have taught me.
103 How sweet are your words to my taste! *
they are sweeter than honey to my mouth.
104 Through your commandments I gain understanding; *
therefore I hate every lying way.

1st Reading (Track 2):  Genesis 32:22-31
Jacob had tricked his twin brother Esau out of his birthright as the firstborn and then cheated him out of his father Isaac’s blessing, all with the help of his mother Rebekah. He fled Esau’s wrath and stayed with his uncle Laban, and married his daughters, Leah and Rachel. After twenty years he decided to return, although he still feared his brother. Chapter 32 begins with Jacob calculating how he might return and win his brother’s acceptance. The night before he anticipates meeting Esau is the night of the following story. Jacob wrestles with a divine being (which, in the end, he interprets to have been God himself). Jacob would have won, except the cheater was cheated! As he returns to the land sworn to his ancestors, this incident changes his name from Jacob (“Supplanter”) to Israel (“the one who strives with God”). This will become the name of the people who grow from his family.

32:22 Jacob got up at night and took his two wives, his two maids, and his eleven children, and crossed the ford of the Jabbok. 23 He took them and sent them across the stream, and likewise everything that he had. 24 Jacob was left alone; and a man wrestled with him until daybreak. 25 When the man saw that he did not prevail against Jacob, he struck him on the hip socket; and Jacob’s hip was put out of joint as he wrestled with him. 26 Then he said, “Let me go, for the day is breaking.” But Jacob said, “I will not let you go, unless you bless me.” 27 So he said to him, “What is your name?” And he said, “Jacob.” 28 Then the man said, “You shall no longer be called Jacob, but Israel, for you have striven with God and with humans, and have prevailed.” 29 Then Jacob asked him, “Please tell me your name.” But he said, “Why is it that you ask my name?” And there he blessed him. 30 So Jacob called the place Peniel, saying, “For I have seen God face to face, and yet my life is preserved.” 31 The sun rose upon him as he passed Penuel, limping because of his hip.

Psalm 121 (Track 2)
Psalm 121 is one of the “Songs of Ascent” (Psalms 120—134), thought to have been the songs of pilgrims on the way to Jerusalem to celebrate the major festivals.  “The hills” is probably a reference to the “high places” around Jerusalem where the baals, the local fertility gods, were still worshiped.

1 I lift up my eyes to the hills; *
from where is my help to come?
2 My help comes from the Lord, *
the maker of heaven and earth.
3 He will not let your foot be moved *
and he who watches over you will not fall asleep.
4 Behold, he who keeps watch over Israel *
shall neither slumber nor sleep;
5 The Lord himself watches over you; *
the Lord is your shade at your right hand,
6 So that the sun shall not strike you by day, *
nor the moon by night.
7 The Lord shall preserve you from all evil; *
it is he who shall keep you safe.
8 The Lord shall watch over your going out and your coming in, *
from this time forth for evermore.

2nd Reading:  2 Timothy 3:14—4:5
At the end of Paul’s second letter to his protégé Timothy, he turns to instructions for Timothy himself.  In the first sentence of this passage, Paul is not only talking about himself as Timothy’s teacher.  The “from whom” in Greek is plural (something impossible to pull off easily in English).  Paul’s words concerning the inspiration of Scripture are well known but interpreted in widely different ways.  The Greek is properly translated “inspired” and not “written.”  Paul was not a literalist, although he clearly took Scripture (which for him were the Hebrew Scriptures) very seriously.  Paul is not concerned hear with the “origin” of Scripture but its proper use in the community.

3:14 As for you, continue in what you have learned and firmly believed, knowing from whom you learned it, 15 and how from childhood you have known the sacred writings that are able to instruct you for salvation through faith in Christ Jesus. 16 All scripture is inspired by God and is useful for teaching, for reproof, for correction, and for training in righteousness, 17 so that everyone who belongs to God may be proficient, equipped for every good work. 4:1 In the presence of God and of Christ Jesus, who is to judge the living and the dead, and in view of his appearing and his kingdom, I solemnly urge you: 2 proclaim the message; be persistent whether the time is favorable or unfavorable; convince, rebuke, and encourage, with the utmost patience in teaching. 3 For the time is coming when people will not put up with sound doctrine, but having itching ears, they will accumulate for themselves teachers to suit their own desires, 4 and will turn away from listening to the truth and wander away to myths. 5 As for you, always be sober, endure suffering, do the work of an evangelist, carry out your ministry fully.

Gospel Reading:  Luke 18:1-8
One of the more humorous of Jesus’ parables has the very serious message of persistence in prayer, and the admonition not to lose heart.  Jesus clearly knew the power of prayer (and his praying is emphasized in Luke’s Gospel), but he also knew the times of crisis and despair that often test us.  Clearly he would not feel the need to teach us to not lose heart if he did not know from his own experience how easy that is from time to time.  Like Paul’s encouragement to Timothy about proclaiming the message, Jesus encourages to pray “whether the time is favorable or unfavorable” (“in season or out of season”), here, “day and night.”

18:1 Jesus told them a parable about their need to pray always and not to lose heart. 2 He said, “In a certain city there was a judge who neither feared God nor had respect for people. 3 In that city there was a widow who kept coming to him and saying, ‘Grant me justice against my opponent.’ 4 For a while he refused; but later he said to himself, ‘Though I have no fear of God and no respect for anyone, 5 yet because this widow keeps bothering me, I will grant her justice, so that she may not wear me out by continually coming.’” 6 And the Lord said, “Listen to what the unjust judge says. 7 And will not God grant justice to his chosen ones who cry to him day and night? Will he delay long in helping them? 8 I tell you, he will quickly grant justice to them. And yet, when the Son of Man comes, will he find faith on earth?”

The Scripture quotations are from the New Revised Standard Version Bible, copyright © 1989 by the Division of Christian Education of the National Council of Churches of Christ in the U.S.A. The translation of the Psalm are from The Book of Common Prayer. Commentaries are copyright © 2019 Epiphany Esources, 67 E. Main St., Hornell, NY  14843, www.EpiphanyEsources.com. All rights reserved.  Permission is given to copy for group study.  Bulletin inserts are available. Go to our website for more information.

Posted by The Rev Michael W Hopkins at 11:24 AM