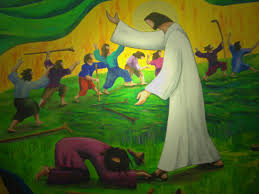 Lepers tended to live in groups, avoiding contact with the general populace, but close enough to them to receive alms.

1st Reading (Track 1): Jeremiah 29:1, 4-7
The prophet Jeremiah, in chapters 24 and 29, speaks a pastoral word to the Jews in exile in Babylon, after the first deportation in 598 b.c.e. It is obvious at this point that they are in for a long haul (see chapters 27 & 28). Jeremiah has two important words for them. The first is contained in the short portion of a communication he makes in the reading below. You must embrace your reality, and continue to live in obedience to God, even in exile. Verse 7 is a remarkable statement—work for the well-being (shalom) of Babylon, even as you live there in exile. Israel has a mission, even among its oppressors.

29:1 These are the words of the letter that the prophet Jeremiah sent from Jerusalem to the remaining elders among the exiles, and to the priests, the prophets, and all the people, whom Nebuchadnezzar had taken into exile from Jerusalem to Babylon. 4 Thus says the Lord of hosts, the God of Israel, to all the exiles whom I have sent into exile from Jerusalem to Babylon: 5 Build houses and live in them; plant gardens and eat what they produce. 6 Take wives and have sons and daughters; take wives for your sons, and give your daughters in marriage, that they may bear sons and daughters; multiply there, and do not decrease. 7 But seek the welfare of the city where I have sent you into exile, and pray to the Lord on its behalf, for in its welfare you will find your welfare.

Psalm 66:1-11 (Track 1)
Psalm 66 (which totals 20 verses) is, in many ways, a typical psalm of thanks and praise. Its uniqueness (and the reason it makes a good response to the Jeremiah reading) is its consistent use of “all lands,” and “all peoples.” This is an inclusive vision of Israel’s mission, taken up also by the prophet Isaiah, who sees Israel’s vocation to be a “light to the nations” (see, for example, Isaiah 42:6).

1 Be joyful in God, all you lands; *
sing the glory of his Name; sing the glory of his praise.
2 Say to God, “How awesome are your deeds! *
because of your great strength
your enemies cringe before you.
3 All the earth bows down before you, *
sings to you, sings out your Name.”
4 Come now and see the works of God, *
how wonderful he is in his doing toward all people.
5 He turned the sea into dry land,
so that they went through the water on foot, *
and there we rejoiced in him.
6 In his might he rules for ever;
his eyes keep watch over the nations; *
let no rebel rise up against him.
7 Bless our God, you peoples; *
make the voice of his praise to be heard;
8 Who holds our souls in life, *
and will not allow our feet to slip.
9 For you, O God, have proved us; *
you have tried us just as silver is tried.
10 You brought us into the snare; *
you laid heavy burdens upon our backs.
11 You let enemies ride over our heads;
we went through fire and water; *
but you brought us out into a place of refreshment.

1st Reading (Track 2): 2 Kings 5:1-3, 7-15c
Leprosy was a notorious disease in the ancient world.  The term referred to any malformation of the skin, and also to such things as mold and mildew on walls.  All of these manifestations were connected to social and ritual uncleanness and resulted in separation and ostracism.  The story of Naaman the Syrian (Aramean) is set in the context of a number of stories highlighting the power of the prophet Elisha.  In this particular story there is also the element of the one in need being a foreigner, and even an enemy.  This shows up in Naaman’s arrogance and the King of Israel’s fear. While much of the Hebrew Scriptures define a very firm boundary between Jew and Gentile, this story is part of a “minority report” that shows that Israel’s faith can reach beyond boundaries. Jesus will use this story in Luke 4.

5:1 Naaman, commander of the army of the king of Aram, was a great man and in high favor with his master, because by him the Lord had given victory to Aram. The man, though a mighty warrior, suffered from leprosy. 2 Now the Arameans on one of their raids had taken a young girl captive from the land of Israel, and she served Naaman’s wife. 3 She said to her mistress, “If only my lord were with the prophet who is in Samaria! He would cure him of his leprosy.” 7 When the king of Israel read the letter [from the King of Aram concerning Naaman], he tore his clothes and said, “Am I God, to give death or life, that this man sends word to me to cure a man of his leprosy? Just look and see how he is trying to pick a quarrel with me.” 8 But when Elisha the man of God heard that the king of Israel had torn his clothes, he sent a message to the king, “Why have you torn your clothes? Let him come to me, that he may learn that there is a prophet in Israel.” 9 So Naaman came with his horses and chariots, and halted at the entrance of Elisha’s house. 10 Elisha sent a messenger to him, saying, “Go, wash in the Jordan seven times, and your flesh shall be restored and you shall be clean.” 11 But Naaman became angry and went away, saying, “I thought that for me he would surely come out, and stand and call on the name of the Lord his God, and would wave his hand over the spot, and cure the leprosy! 12 Are not Abana and Pharpar, the rivers of Damascus, better than all the waters of Israel? Could I not wash in them, and be clean?” He turned and went away in a rage. 13 But his servants approached and said to him, “Father, if the prophet had commanded you to do something difficult, would you not have done it? How much more, when all he said to you was, ‘Wash, and be clean’?” 14 So he went down and immersed himself seven times in the Jordan, according to the word of the man of God; his flesh was restored like the flesh of a young boy, and he was clean. 15 Then he returned to the man of God, he and all his company; he came and stood before him and said, “Now I know that there is no God in all the earth except in Israel.”

Psalm 111 (Track 2)
Psalm 111 is an acrostic poem, each line beginning with a subsequent letter of the Hebrew alphabet. It is a hymn of praise recalling the mighty acts of God and commitment to the covenant. The Lord has been faithful and requires faithfulness from the people.

1 Hallelujah!  I will give thanks to the Lord with my whole heart, *
in the assembly of the upright, in the congregation.
2 Great are the deeds of the Lord! *
they are studied by all who delight in them.
3 His work is full of majesty and splendor, *
and his righteousness endures for ever.
4 He makes his marvelous works to be remembered; *
the Lord is gracious and full of compassion.
5 He gives food to those who fear him; *
he is ever mindful of his covenant.
6 He has shown his people the power of his works *
in giving them the lands of the nations.
7 The works of his hands are faithfulness and justice; *
all his commandments are sure.
8 They stand fast for ever and ever, *
because they are done in truth and equity.
9 He sent redemption to his people;
he commanded his covenant for ever; *
holy and awesome is his Name.
10 The fear of the Lord is the beginning of wisdom; *
those who act accordingly have a good understanding;
his praise endures for ever.

2nd Reading: 2 Timothy 2:8-15
Paul continues his plea to Timothy to remain steadfast to the tradition he has received (think of the promise of our own Baptismal Covenant that we will “continue in the apostles’ teaching”).  There is evidence that Paul quotes from an ancient Christian hymn in verses 11-13, “If we have died with him….for he cannot deny himself.”  Paul urges Timothy to remain true to the heart of his teaching and not get caught up in semantic disputes.  Keep to the basics:  “Jesus Christ raised from the dead.”

2:8 Remember Jesus Christ, raised from the dead, a descendant of David—that is my gospel, 9 for which I suffer hardship, even to the point of being chained like a criminal. But the word of God is not chained. 10 Therefore I endure everything for the sake of the elect, so that they may also obtain the salvation that is in Christ Jesus, with eternal glory. 11 The saying is sure: If we have died with him, we will also live with him; 12 if we endure, we will also reign with him; if we deny him, he will also deny us; 13 if we are faithless, he remains faithful—for he cannot deny himself. 14 Remind them of this, and warn them before God that they are to avoid wrangling over words, which does no good but only ruins those who are listening. 15 Do your best to present yourself to God as one approved by him, a worker who has no need to be ashamed, rightly explaining the word of truth.

Gospel Reading: Luke 17:11-19
As this passage begins, Luke reminds us that Jesus is on his way to Jerusalem (a journey that began at 9:51).  This story is found only in Luke’s Gospel.  The story is realistic. Lepers tended to live in groups, avoiding contact with the general populace, but close enough to them to receive alms.  Jesus tells them to do what the law requires for them to be declared clean—show yourselves to the priests.  The fact that the Samaritan returned may have primarily to do with the fact that showing himself to the priests would have done him no good.  As a Samaritan, he could never be made clean. Jesus is clear, however that not only can he be made clean, he is made clean.

17:11 On the way to Jerusalem Jesus was going through the region between Samaria and Galilee. 12 As he entered a village, ten lepers approached him. Keeping their distance, 13 they called out, saying, “Jesus, Master, have mercy on us!” 14 When he saw them, he said to them, “Go and show yourselves to the priests.” And as they went, they were made clean. 15 Then one of them, when he saw that he was healed, turned back, praising God with a loud voice. 16 He prostrated himself at Jesus’ feet and thanked him. And he was a Samaritan. 17 Then Jesus asked, “Were not ten made clean? But the other nine, where are they? 18 Was none of them found to return and give praise to God except this foreigner?” 19 Then he said to him, “Get up and go on your way; your faith has made you well.”

The Scripture quotations are from the New Revised Standard Version Bible, copyright © 1989 by the Division of Christian Education of the National Council of Churches of Christ in the U.S.A., and are used by permission. The translation of the Psalm is from The Book of Common Prayer. Commentaries are copyright © 2019 Epiphany Esources, 67 E. Main St., Hornell, NY  14843, www.EpiphanyEsources.com. All rights reserved.  Permission is given to copy for group study. Bulletin inserts are available. Visit our website for more details. And like us on Facebook!

Posted by The Rev Michael W Hopkins at 4:12 PM