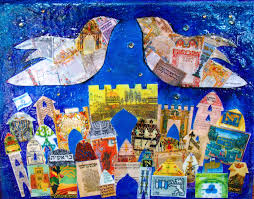 So then you are no longer strangers and aliens, but you are citizens with the saints and also members of the household of God,

At this point in the biblical story, the promise made to Abraham has been fulfilled in many ways. They are a people and they have settled in a land, including a capital, and a royal palace. Now King David wishes to “settle” God as well. It is time, he thinks, to put the tent away that has housed the Ark of the Covenant.  The prophet Nathan agrees, but God does not. God neither wants nor needs a house. David and his descendants are all the house God intends on establishing. It will fall to David’s son Solomon to build the Temple.

7:1 Now when [King David] was settled in his house, and the Lord had given him rest from all his enemies around him, 2 the king said to the prophet Nathan, “See now, I am living in a house of cedar, but the ark of God stays in a tent.” 3 Nathan said to the king, “Go, do all that you have in mind; for the Lord is with you.” 4 But that same night the word of the Lord came to Nathan:  5 Go and tell my servant David:  Thus says the Lord:  Are you the one to build me a house to live in? 6 I have not lived in a house since the day I brought up the people of Israel from Egypt to this day, but I have been moving about in a tent and a tabernacle. 7 Wherever I have moved about among all the people of Israel, did I ever speak a word with any of the tribal leaders of Israel, whom I commanded to shepherd my people Israel, saying, “Why have you not built me a house of cedar?” 8 Now therefore thus you shall say to my servant David:  Thus says the Lord of hosts:  I took you from the pasture, from following the sheep to be prince over my people Israel; 9 and I have been with you wherever you went, and have cut off all your enemies from before you; and I will make for you a great name, like the name of the great ones of the earth. 10 And I will appoint a place for my people Israel and will plant them, so that they may live in their own place, and be disturbed no more; and evildoers shall afflict them no more, as formerly, 11 from the time that I appointed judges over my people Israel; and I will give you rest from all your enemies. Moreover the Lord declares to you that the Lord will make you a house. 12 When your days are fulfilled and you lie down with your ancestors, I will raise up your offspring after you, who shall come forth from your body, and I will establish his kingdom. 13 He shall build a house for my name, and I will establish the throne of his kingdom forever. 14 I will be a father to him, and he shall be a son to me.

20   I have found David my servant; *
with my holy oil have I anointed him.
21   My hand will hold him fast *
and my arm will make him strong.
22   No enemy shall deceive him, *
nor any wicked man bring him down.
23   I will crush his foes before him *
and strike down those who hate him.
24   My faithfulness and love shall be with him, *
and he shall be victorious through my Name.
25   I shall make his dominion extend *
from the Great Sea to the River.
26   He will say to me, “You are my Father, *
my God, and the rock of my salvation.”
27   I will make him my firstborn *
and higher than the kings of the earth.
28   I will keep my love for him for ever, *
and my covenant will stand firm for him.
29   I will establish his line for ever *
and his throne as the days of heaven.
30   “If his children forsake my law *
and do not walk according to my judgments;
31   If they break my statutes *
and do not keep my commandments
32   I will punish their transgressions with a rod *
and their iniquities with the lash;
33   But I will not take my love from him, *
nor let my faithfulness prove false.
34   I will not break my covenant, *
nor change what has gone out of my lips.
35   Once for all I have sworn by my holiness: *
“I will not lie to David.
36   His line shall endure for ever *
and his throne as the sun before me;
37   It shall stand fast for evermore like the moon, *
the abiding witness in the sky.”

1st Reading (Track 2):  Jeremiah 23:1-6
Jeremiah 23 begins with an indictment against the leaders of the nation, using the images of shepherds and sheep, which are found frequently in the Hebrew Scriptures.  The Lord promises to raise up faithful servant leaders, and, in particular, one ruler of the “righteous branch” of David.  “The Lord is our righteousness” could also be translated, “The Lord is our justice.”  Christians have often interpreted this righteous ruler to come to be Jesus, though Jesus did not seek to be a political leader.

23:1 Woe to the shepherds who destroy and scatter the sheep of my pasture! says the Lord. 2 Therefore thus says the Lord, the God of Israel, concerning the shepherds who shepherd my people:  It is you who have scattered my flock, and have driven them away, and you have not attended to them. So I will attend to you for your evil doings, says the Lord. 3 Then I myself will gather the remnant of my flock out of all the lands where I have driven them, and I will bring them back to their fold, and they shall be fruitful and multiply. 4 I will raise up shepherds over them who will shepherd them, and they shall not fear any longer, or be dismayed, nor shall any be missing, says the Lord. 5 The days are surely coming, says the Lord, when I will raise up for David a righteous Branch, and he shall reign as king and deal wisely, and shall execute justice and righteousness in the land. 6 In his days Judah will be saved and Israel will live in safety. And this is the name by which he will be called:  “The Lord is our righteousness.”

Psalm 23 (Track 2)
This most beloved of psalms, Old Testament scholar Walter Brueggemann says, “invites us into a world of deep trust and lean desire.”  By “lean desire” he means that the trust we put in the Lord who is the shepherd is a trust that focuses and simplifies our needs.  This is a psalm not only of protection, but also of perspective.

1     The Lord is my shepherd; *
I shall not be in want.
2     He makes me lie down in green pastures *
and leads me beside still waters.
3     He revives my soul *
and guides me along right pathways for his Name’s sake.
4     Though I walk through the valley of the shadow of death,
I shall fear no evil; *
for you are with me;
your rod and your staff, they comfort me.
5     You spread a table before me in the presence of those
who trouble me; *
you have anointed my head with oil,
and my cup is running over.
6     Surely your goodness and mercy shall follow me all the days
of my life, *
and I will dwell in the house of the Lord for ever.

2nd Reading:  Ephesians 2:11-22
The writer of Ephesians (perhaps Paul, or someone from the next generation) makes an eloquent statement of the unity of peoples which Christ makes possible.  Alienation, hostility, and division are no more, reconciliation has been brought about by Christ and peace—well-being for all—is the result.  Two images for this new reality are used:  all are saints (“holy ones,” here meant to mean all united in Christ, not only some with special gifts), and all are members of the household of God—an image we use when we welcome the newly baptized (BCP, p. 308).

2:11 So then, remember that at one time you Gentiles by birth, called “the uncircumcision” by those who are called “the circumcision”—a physical circumcision made in the flesh by human hands—12 remember that you were at that time without Christ, being aliens from the commonwealth of Israel, and strangers to the covenants of promise, having no hope and without God in the world. 13 But now in Christ Jesus you who once were far off have been brought near by the blood of Christ. 14 For he is our peace; in his flesh he has made both groups into one and has broken down the dividing wall, that is, the hostility between us. 15 He has abolished the law with its commandments and ordinances, that he might create in himself one new humanity in place of the two, thus making peace, 16 and might reconcile both groups to God in one body through the cross, thus putting to death that hostility through it. 17 So he came and proclaimed peace to you who were far off and peace to those who were near; 18 for through him both of us have access in one Spirit to the Father. 19 So then you are no longer strangers and aliens, but you are citizens with the saints and also members of the household of God, 20 built upon the foundation of the apostles and prophets, with Christ Jesus himself as the cornerstone. 21 In him the whole structure is joined together and grows into a holy temple in the Lord; 22 in whom you also are built together spiritually into a dwelling place for God.

Gospel Reading:  Mark 6:30-34, 53-56
The disciples have returned from their “mission trip,” and Jesus seeks to find them some well-deserved rest.  He is unsuccessful, for the crowds follow him wherever he goes (verses 35-44 tell of the feeding of the 5,000 and verses 45-52, Jesus’ walking on water).  They are received well in Gennesaret (in Gentile territory), far better than they were in Jesus’ hometown.

6:30 The apostles gathered around Jesus, and told him all that they had done and taught. 31 He said to them, “Come away to a deserted place all by yourselves and rest a while.” For many were coming and going, and they had no leisure even to eat. 32 And they went away in the boat to a deserted place by themselves. 33 Now many saw them going and recognized them, and they hurried there on foot from all the towns and arrived ahead of them. 34 As he went ashore, he saw a great crowd; and he had compassion for them, because they were like sheep without a shepherd; and he began to teach them many things. 53 When they had crossed over, they came to land at Gennesaret and moored the boat. 54 When they got out of the boat, people at once recognized him, 55 and rushed about that whole region and began to bring the sick on mats to wherever they heard he was. 56 And wherever he went, into villages or cities or farms, they laid the sick in the marketplaces, and begged him that they might touch even the fringe of his cloak; and all who touched it were healed.

Posted by The Rev Michael W Hopkins at 11:42 AM