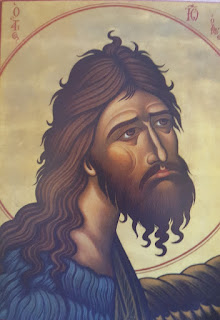 Immediately she rushed back to the king and requested, “I want you to give me at once the head of John the Baptist on a platter.”

1st Reading (Track 1):  2 Samuel 6:1-5, 12b-19
David continues to enhance his prestige by bringing the sacred Ark of the Covenant to Jerusalem.  It is done with great rejoicing.  The verses skipped include the death of Uzzah when he reaches out to steady the Ark.  David may have the power to move the Ark, but the Ark and its Lord are not to be trifled with.  David enters the city dressed with a priestly ephod, but apparently only that!  Perhaps his wife Michal is unhappy that David is making a spectacle of himself, or perhaps she is mourning the death of her father, who was also possessed by the Spirit (1 Sam. 10:5-6) in the same way that seems to be affecting David.

6:1 David again gathered all the chosen men of Israel, thirty thousand. 2 David and all the people with him set out and went from Baale-judah, to bring up from there the ark of God, which is called by the name of the Lord of hosts who is enthroned on the cherubim. 3 They carried the ark of God on a new cart, and brought it out of the house of Abinadab, which was on the hill. Uzzah and Ahio, the sons of Abinadab, were driving the new cart 4 with the ark of God; and Ahio went in front of the ark. 5 David and all the house of Israel were dancing before the Lord with all their might, with songs and lyres and harps and tambourines and castanets and cymbals. 12b So David went and brought up the ark of geGod from the house of Obed-edom to the city of David with rejoicing; 13 and when those who bore the ark of the Lord had gone six paces, he sacrificed an ox and a fatling. 14 David danced before the Lord with all his might; David was girded with a linen ephod. 15 So David and all the house of Israel brought up the ark of the Lord with shouting, and with the sound of the trumpet. 16 As the ark of the Lord came into the city of David, Michal daughter of Saul looked out of the window, and saw King David leaping and dancing before the Lord; and she despised him in her heart. 17 They brought in the ark of the Lord, and set it in its place, inside the tent that David had pitched for it; and David offered burnt offerings and offerings of well-being before the Lord. 18 When David had finished offering the burnt offerings and the offerings of well-being, he blessed the people in the name of the Lord of hosts,19 and distributed food among all the people, the whole multitude of Israel, both men and women, to each a cake of bread, a portion of meat, and a cake of raisins. Then all the people went back to their homes.

Psalm 24 (Track 1)
Psalm 24 is a hymn for use in worship. It begins with the claim of God’s sovereignty over the entire creation (1-2), then goes on to give criteria for accessing the Temple (3-6).  Verses 7-10 seem to be an entrance ritual.

1st Reading (Track 2):  Amos 7:7-15
The prophet Amos was sent to the northern Kingdom of Israel to draw attention to injustice and warn of the Lord’s coming judgment.  More than once he reminds those to whom he speaks that he is no prophet, but a “dresser of sycamore trees.”  Nevertheless, he speaks what he is told.  Jeroboam II ruled Israel from 786 to 746 b.c.e.  He was the last king of the line of Jehu.  20 or so years after his death, the northern kingdom was destroyed by the Assyrian Empire.

7:7 This is what the Lord God showed me:  the Lord was standing beside a wall built with a plumb line, with a plumb line in his hand. 8 And the Lord said to me, “Amos, what do you see?” And I said, “A plumb line.” Then the Lord said, “See, I am setting a plumb line in the midst of my people Israel; I will never again pass them by; 9 the high places of Isaac shall be made desolate, and the sanctuaries of Israel shall be laid waste, and I will rise against the house of Jeroboam with the sword.” 10 Then Amaziah, the priest of Bethel, sent to King Jeroboam of Israel, saying, “Amos has conspired against you in the very center of the house of Israel; the land is not able to bear all his words. 11 For thus Amos has said, ‘Jeroboam shall die by the sword, and Israel must go into exile away from his land.’” 12 And Amaziah said to Amos, “O seer, go, flee away to the land of Judah, earn your bread there, and prophesy there; 13 but never again prophesy at Bethel, for it is the king’s sanctuary, and it is a temple of the kingdom.” 14 Then Amos answered Amaziah, “I am no prophet, nor a prophet’s son; but I am a herdsman, and a dresser of sycamore trees, 15 and the Lord took me from following the flock, and the Lord said to me, ‘Go, prophesy to my people Israel.’”

Psalm 85:8-13 (Track 2)
Psalm 85 as a whole is a communal lament, urging God to restore the people.  This theme may date this psalm from the time of the exile in Babylon.  The portion of the psalm below praises God’s mercy and the assurance of the restoration of the covenant, characterized by love, truth, justice, and peace.

8     I will listen to what the Lord God is saying, *
for he is speaking peace to his faithful people
and to those who turn their hearts to him.
9     Truly, his salvation is very near to those who fear him, *
that his glory may dwell in our land.
10   Mercy and Truth have met together; *
righteousness and peace have kissed each other.
11   Truth shall spring up from the earth, *
and righteousness shall look down from heaven.
12   The Lord will indeed grant prosperity, *
and our land will yield its increase.
13   Righteousness shall go before him, *
and peace shall be a pathway for his feet.

2nd Reading:  Ephesians 1:3-14
We will spend the next seven weeks reading through the Letter to the Ephesians.  Attributed to Paul, who spent much time in Ephesus, its language places it in the second generation, probably written a few decades after Paul’s death.  Our reading today is a blessing prayer, whose phrasing is hymn-like, using repetitions such as “in Christ” and “for the praise of his glory.”  There is also a strong reference to Baptism, i.e., that “you were marked with the seal of the promised Holy Spirit.”

1:3 Blessed be the God and Father of our Lord Jesus Christ, who has blessed us in Christ with every spiritual blessing in the heavenly places, 4 just as he chose us in Christ before the foundation of the world to be holy and blameless before him in love. 5 He destined us for adoption as his children through Jesus Christ, according to the good pleasure of his will, 6 to the praise of his glorious grace that he freely bestowed on us in the Beloved. 7 In him we have redemption through his blood, the forgiveness of our trespasses, according to the riches of his grace 8 that he lavished on us. With all wisdom and insight 9 he has made known to us the mystery of his will, according to his good pleasure that he set forth in Christ, 10 as a plan for the fullness of time, to gather up all things in him, things in heaven and things on earth. 11 In Christ we have also obtained an inheritance, having been destined according to the purpose of him who accomplishes all things according to his counsel and will, 12 so that we, who were the first to set our hope on Christ, might live for the praise of his glory. 13 In him you also, when you had heard the word of truth, the gospel of your salvation, and had believed in him, were marked with the seal of the promised Holy Spirit; 14 this is the pledge of our inheritance toward redemption as God’s own people, to the praise of his glory.

Gospel Reading:  Mark 6:14-29
Our Gospel reading begins with speculation about Jesus’ identity.  King Herod fears that Jesus is John the Baptist risen from the dead.  We then get the story of John’s death.  Herod is shown as weak and easily manipulated, allowing for his illegitimate wife to exact her revenge.  The story foreshadows Jesus’ arrest and death, particularly in the weakness of Pilate (Mark 15:15).

6:14 King Herod heard of Jesus and his disciples, for Jesus’ name had become known. Some were saying, “John the baptizer has been raised from the dead; and for this reason these powers are at work in him.” 15 But others said, “It is Elijah.” And others said, “It is a prophet, like one of the prophets of old.” 16 But when Herod heard of it, he said, “John, whom I beheaded, has been raised.” 17 For Herod himself had sent men who arrested John, bound him, and put him in prison on account of Herodias, his brother Philip’s wife, because Herod had married her. 18 For John had been telling Herod, “It is not lawful for you to have your brother’s wife.” 19 And Herodias had a grudge against him, and wanted to kill him. But she could not, 20 for Herod feared John, knowing that he was a righteous and holy man, and he protected him. When he heard him, he was greatly perplexed; and yet he liked to listen to him. 21 But an opportunity came when Herod on his birthday gave a banquet for his courtiers and officers and for the leaders of Galilee. 22 When his daughter Herodias came in and danced, she pleased Herod and his guests; and the king said to the girl, “Ask me for whatever you wish, and I will give it.” 23 And he solemnly swore to her, “Whatever you ask me, I will give you, even half of my kingdom.” 24 She went out and said to her mother, “What should I ask for?” She replied, “The head of John the baptizer.” 25 Immediately she rushed back to the king and requested, “I want you to give me at once the head of John the Baptist on a platter.” 26 The king was deeply grieved; yet out of regard for his oaths and for the guests, he did not want to refuse her. 27 Immediately the king sent a soldier of the guard with orders to bring John’s head. He went and beheaded him in the prison, 28 brought his head on a platter, and gave it to the girl. Then the girl gave it to her mother. 29 When his disciples heard about it, they came and took his body, and laid it in a tomb.

Posted by The Rev Michael W Hopkins at 10:17 AM