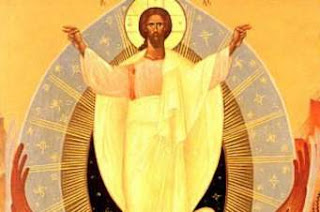 The First Reading:  Acts of the Apostles 10:34-43
This short passage is part of a long story (Acts 10:1—11:18) about how the Gentiles came to be understood as having the same relationship with Jesus as his fellow Jews. The apostle Peter and the gentile Cornelius have both had visions causing them to seek each other out. When Peter meets Cornelius in the latter’s own house (a line observant Jews were not to cross), he experiences the Pentecostal Spirit at work among them just as he and his fellow disciples had experienced it. This leads to the following declaration. It is a testimony to the power of Jesus’ passion, death, and resurrection.

10:34 Peter began to speak to Cornelius and the other Gentiles: “I truly understand that God shows no partiality, 35 but in every nation anyone who fears him and does what is right is acceptable to him. 36 You know the message he sent to the people of Israel, preaching peace by Jesus Christ—he is Lord of all. 37 That message spread throughout Judea, beginning in Galilee after the baptism that John announced:  38 how God anointed Jesus of Nazareth with the Holy Spirit and with power; how he went about doing good and healing all who were oppressed by the devil, for God was with him. 39 We are witnesses to all that he did both in Judea and in Jerusalem. They put him to death by hanging him on a tree; 40 but God raised him on the third day and allowed him to appear, 41 not to all the people but to us who were chosen by God as witnesses, and who ate and drank with him after he rose from the dead. 42 He commanded us to preach to the people and to testify that he is the one ordained by God as judge of the living and the dead. 43 All the prophets testify about him that everyone who believes in him receives forgiveness of sins through his name.”

The First Reading:  Jeremiah 31:1-6
Jeremiah is known as “the gloomy prophet,” but in chapters 30 through 33, his tome changes, even so that these chapters are known as “The Book of Comfort.” What may seem as a throw-away opening verse is actually good news for a people who have felt abandoned by God while in exile in Babylon.  Jeremiah calls on the old memory of the Exodus wilderness to make a statement about God’s continued presence with his people. Verses 4 through 6 acknowledge Israel’s current plight by use of the threefold “Again…again…again.”  The time of exile, a dramatic break in well-being for Israel, will be overcome by the Lord who has never abandoned his faithfulness.

31:1 At that time, says the Lord, I will be the God of all the families of Israel, and they shall be my people. 2 Thus says the Lord: The people who survived the sword found grace in the wilderness; when Israel sought for rest, 3 the Lord appeared to him from far away. I have loved you with an everlasting love; therefore I have continued my faithfulness to you. 4 Again I will build you, and you shall be built, O virgin Israel! Again you shall take your tambourines, and go forth in the dance of the merrymakers. 5 Again you shall plant vineyards on the mountains of Samaria; the planters shall plant, and shall enjoy the fruit. 6 For there shall be a day when sentinels will call in the hill country of Ephraim: “Come, let us go up to Zion, to the Lord our God.”

Psalm 118:1-2, 14-24
Psalm 118 is a song of thanksgiving rooted in Israel’s worship of a faithful God. It has long been associated with Holy Week and Easter because the first part of the psalm acknowledges distress, and the second half pivots to gratitude for deliverance. The stone which the builder’s rejected has become the chief cornerstone is used by Matthew, Mark, and Luke (in Acts) to describe what God has done in Jesus Christ.

1  Give thanks to the Lord, for he is good; *
his mercy endures for ever.
2  Let Israel now proclaim, *
“His mercy endures for ever.”
14  The Lord is my strength and my song, *
and he has become my salvation.
15  There is a sound of exultation and victory *
in the tents of the righteous:
16  “The right hand of the Lord has triumphed! *
the right hand of the Lord is exalted!
the right hand of the Lord has triumphed!”
17  I shall not die, but live, *
and declare the works of the Lord.
18  The Lord has punished me sorely, *
but he did not hand me over to death.
19  Open for me the gates of righteousness; *
I will enter them; I will offer thanks to the Lord.
20  “This is the gate of the Lord; *
he who is righteous may enter.”
21  I will give thanks to you, for you answered me *
and have become my salvation.
22  The same stone which the builders rejected *
has become the chief cornerstone.
23  This is the Lord’s doing, *
and it is marvelous in our eyes.
24  On this day the Lord has acted; *
we will rejoice and be glad in it.

The Second Reading:  Colossians 3:1-4
These four verses are a bridge used by Paul in this letter, which summarizes the argument that has come before it and leads into the section of ethical imperatives that follow.  “If” here is not a conditional word, it connects the text to the end of chapter 2, and, in that context, clearly assumes that “you have been raised.” The mystery of Jesus’ passion, death, and resurrection is a theme of Colossians, emphasized here by use of the word “hidden,” which is also used at 1:26 and 2:2-3. The Greek word used has the definite connation of “hidden in safety.”

Gospel Reading:  John 20:1-18
The Gospel-writer John’s witness to the empty tomb and the initial experiences of the risen Jesus centers on Mary Magdalene, who, on account of this story in particular, is sometimes known as “the Apostle of the Resurrection.” Mary is the first to tell the other disciples, who themselves come to the tomb, but do not remain. Mary, in her grief, does not leave and so has the first encounter with the risen Jesus. Why she does not recognize him is a matter of much speculation, as well as Jesus’ admonition to her not to hold on to him. Whatever the meaning, Mary again becomes the first witness, “I have seen the Lord.”

20:1 Early on the first day of the week, while it was still dark, Mary Magdalene came to the tomb and saw that the stone had been removed from the tomb. 2 So she ran and went to Simon Peter and the other disciple, the one whom Jesus loved, and said to them, “They have taken the Lord out of the tomb, and we do not know where they have laid him.” 3 Then Peter and the other disciple set out and went toward the tomb. 4 The two were running together, but the other disciple outran Peter and reached the tomb first. 5 He bent down to look in and saw the linen wrappings lying there, but he did not go in. 6 Then Simon Peter came, following him, and went into the tomb. He saw the linen wrappings lying there, 7 and the cloth that had been on Jesus’ head, not lying with the linen wrappings but rolled up in a place by itself. 8 Then the other disciple, who reached the tomb first, also went in, and he saw and believed; 9 for as yet they did not understand the scripture, that he must rise from the dead. 10 Then the disciples returned to their homes. 11 But Mary stood weeping outside the tomb. As she wept, she bent over to look into the tomb; 12 and she saw two angels in white, sitting where the body of Jesus had been lying, one at the head and the other at the feet. 13 They said to her, “Woman, why are you weeping?” She said to them, “They have taken away my Lord, and I do not know where they have laid him.” 14 When she had said this, she turned around and saw Jesus standing there, but she did not know that it was Jesus. 15 Jesus said to her, “Woman, why are you weeping? Whom are you looking for?” Supposing him to be the gardener, she said to him, “Sir, if you have carried him away, tell me where you have laid him, and I will take him away.” 16 Jesus said to her, “Mary!” She turned and said to him in Hebrew, “Rabbouni!” (which means Teacher). 17 Jesus said to her, “Do not hold on to me, because I have not yet ascended to the Father. But go to my brothers and say to them, ‘I am ascending to my Father and your Father, to my God and your God.’” 18 Mary Magdalene went and announced to the disciples, “I have seen the Lord”; and she told them that he had said these things to her.

Gospel Reading:  Matthew 28:1-10
In all the Gospel accounts of the discovery of the empty tomb (there is no actual story of the resurrection per se), it is women, led by Mary Magdalene who are the first witnesses. Because of this Mary Magdalene is often called the “Apostle of the Resurrection.” Matthew often tells a story which includes some response of creation, and here we get a report of an earthquake (there had already been one reported at the moment Jesus’ died—see Matt. 27:51-54, but also 8:24 and 24:7). The Gospel writers disagree as to where the post-resurrection appearances take place:  Matthew says Galilee, Luke says Jerusalem, and John first one and then the other (there are no such stories in Mark). The worship of Jesus (v. 9) is unique to Matthew—he clearly believes that it is the correct response to the risen Lord.

28:1 After the sabbath, as the first day of the week was dawning, Mary Magdalene and the other Mary went to see the tomb. 2 And suddenly there was a great earthquake; for an angel of the Lord, descending from heaven, came and rolled back the stone and sat on it. 3 His appearance was like lightning, and his clothing white as snow. 4 For fear of him the guards shook and became like dead men. 5 But the angel said to the women, “Do not be afraid; I know that you are looking for Jesus who was crucified. 6 He is not here; for he has been raised, as he said. Come, see the place where he lay. 7 Then go quickly and tell his disciples, ‘He has been raised from the dead, and indeed he is going ahead of you to Galilee; there you will see him.’ This is my message for you.” 8 So they left the tomb quickly with fear and great joy, and ran to tell his disciples. 9 Suddenly Jesus met them and said, “Greetings!” And they came to him, took hold of his feet, and worshiped him. 10 Then Jesus said to them, “Do not be afraid; go and tell my brothers to go to Galilee; there they will see me.”

The Scripture quotations (except for the psalm) are from the New Revised Standard Version Bible, copyright © 1989 by the Division of Christian Education of the National Council of Churches of Christ in the U.S.A., and are used by permission.  All rights reserved.  The Collect of the Day and the Psalm translation are from The Book of Common Prayer.  Commentaries are copyright © 2017, Epiphany ESources, 67 E. Main St., Hornell, NY  14843, www.epiphanyesources.com. All rights reserved. Permission granted to copy for group study with attribution.
Posted by The Rev Michael W Hopkins at 10:45 AM