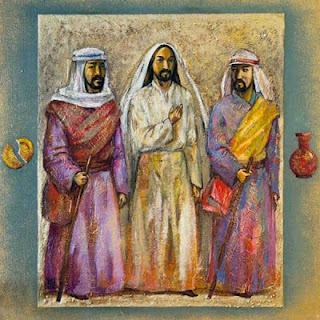 The First Reading:  Acts of the Apostles 2:14a, 36-41
Peter’s Sermon after Pentecost continues.  One must point out the potential anti-semitism in this passage: “ this Jesus whom you crucified.”  This has been taken to mean that the Jews were solely responsible for Jesus’ death (this notion was present in last week’s reading as well).  Through history this charge has led to anti-semitic tendencies among Christians, from which the Church can only repent.  Peter’s point, however, is different.  In his mind it is God who acted in Jesus death and resurrection.  The people were just instruments of this action.

2:14a  But Peter, standing with the eleven, raised his voice and addressed them, 36 “Therefore let the entire house of Israel know with certainty that God has made him both Lord and Messiah, this Jesus whom you crucified.” 37 Now when they heard this, they were cut to the heart and said to Peter and to the other apostles, “Brothers, what should we do?” 38 Peter said to them, “Repent, and be baptized every one of you in the name of Jesus Christ so that your sins may be forgiven; and you will receive the gift of the Holy Spirit. 39 For the promise is for you, for your children, and for all who are far away, everyone whom the Lord our God calls to him.” 40 And he testified with many other arguments and exhorted them, saying, “Save yourselves from this corrupt generation.” 41 So those who welcomed his message were baptized, and that day about three thousand persons were added.

Psalm 116:1-3, 10-17
Our psalm this morning is a psalm of thanksgiving for God’s action in the life of the writer. That action requires a response of offering both praise, thanksgiving and service. The phrase “sacrifice of thanksgiving” will become a very important image in Anglican theology and worship. It is used no less than 14 times in The Book of Common Prayer.

The Second Reading:  1 Peter 1:17-23
Our Eastertide readings from the first letter of Peter continue. Peter uses the metaphor of “ransom” to describe the atonement (how God made salvation possible through the death and resurrection of Jesus). He also uses the metaphor of “exile” to describe the state of Christians in this world. He closes this passage with the image of “new birth” and the commandment to love, both echoes of Jesus from John’s Gospel.

1:17 If you invoke as Father the one who judges all people impartially according to their deeds, live in reverent fear during the time of your exile. 18 You know that you were ransomed from the futile ways inherited from your ancestors, not with perishable things like silver or gold, 19 but with the precious blood of Christ, like that of a lamb without defect or blemish. 20 He was destined before the foundation of the world, but was revealed at the end of the ages for your sake. 21 Through him you have come to trust in God, who raised him from the dead and gave him glory, so that your faith and hope are set on God. 22 Now that you have purified your souls by your obedience to the truth so that you have genuine mutual love, love one another deeply from the heart. 23 You have been born anew, not of perishable but of imperishable seed, through the living and enduring word of God.

The Holy Gospel:  Luke 24:13-35
Our Gospel reading is the well-known and much-loved story of Jesus’ appearance to two disciples on the road to Emmaus. It is clearly a very important story for Luke and appears only in his Gospel. It reflects the pattern of worship that emerged in the early Church: Word and Sacrament. Jesus is revealed as the interpreter of Scripture for Christians (this is a theme throughout Luke’s Gospel), and as the one who is revealed in the breaking of the bread. There is also a detail which allows the reader in any age to insert him or herself into the story:  the unnamed disciples (the companion of Cleopas).

24:13 Now on that same day two of them were going to a village called Emmaus, about seven miles from Jerusalem, 14 and talking with each other about all these things that had happened. 15 While they were talking and discussing, Jesus himself came near and went with them, 16 but their eyes were kept from recognizing him. 17 And he said to them, “What are you discussing with each other while you walk along?” They stood still, looking sad. 18 Then one of them, whose name was Cleopas, answered him, “Are you the only stranger in Jerusalem who does not know the things that have taken place there in these days?” 19 He asked them, “What things?” They replied, “The things about Jesus of Nazareth, who was a prophet mighty in deed and word before God and all the people, 20 and how our chief priests and leaders handed him over to be condemned to death and crucified him. 21 But we had hoped that he was the one to redeem Israel. Yes, and besides all this, it is now the third day since these things took place. 22 Moreover, some women of our group astounded us. They were at the tomb early this morning, 23 and when they did not find his body there, they came back and told us that they had indeed seen a vision of angels who said that he was alive. 24 Some of those who were with us went to the tomb and found it just as the women had said; but they did not see him.” 25 Then he said to them, “Oh, how foolish you are, and how slow of heart to believe all that the prophets have declared! 26 Was it not necessary that the Messiah should suffer these things and then enter into his glory?” 27 Then beginning with Moses and all the prophets, he interpreted to them the things about himself in all the scriptures. 28 As they came near the village to which they were going, he walked ahead as if he were going on. 29 But they urged him strongly, saying, “Stay with us, because it is almost evening and the day is now nearly over.” So he went in to stay with them. 30 When he was at the table with them, he took bread, blessed and broke it, and gave it to them. 31 Then their eyes were opened, and they recognized him; and he vanished from their sight. 32 They said to each other, “Were not our hearts burning within us while he was talking to us on the road, while he was opening the scriptures to us?” 33 That same hour they got up and returned to Jerusalem; and they found the eleven and their companions gathered together. 34 They were saying, “The Lord has risen indeed, and he has appeared to Simon!” 35 Then they told what had happened on the road, and how he had been made known to them in the breaking of the bread.

The Scripture quotations (except for the psalm) are from the New Revised Standard Version Bible, copyright © 1989 by the Division of Christian Education of the National Council of Churches of Christ in the U.S.A., and are used by permission.  All rights reserved.  The Collect of the Day and the Psalm translation are from The Book of Common Prayer.  Commentaries are copyright © 2017, Epiphany ESources, 67 E. Main St., Hornell, NY  14843, www.epiphanyesources.com. All rights reserved. Permission to copy and edit for church services is given, provided this attribution remains.
Posted by The Rev Michael W Hopkins at 2:02 PM