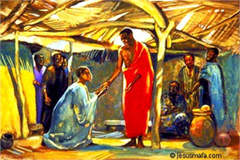 The First Reading:  Acts of the Apostles 2:14a, 22-32
By tradition we read from the Acts of the Apostles during Eastertide. Our reading this morning is from Peter’s first sermon, following Pentecost, the descent of the Holy Spirit on the disciples and others. The sermon traces the passion, death and resurrection of Jesus, including Peter’s interpretation of a portion of Psalm 16 (this morning’s psalm).  The use of the Hebrew Scriptures to foretell the events of Jesus’ life, death and resurrection was important to the early followers of Jesus, underscoring the fact that these followers were observant Jews, for whom those Scriptures were vitally important.

2:14a  But Peter, standing with the eleven, raised his voice and addressed them, 22 “You that are Israelites, listen to what I have to say:  Jesus of Nazareth, a man attested to you by God with deeds of power, wonders, and signs that God did through him among you, as you yourselves know—23 this man, handed over to you according to the definite plan and foreknowledge of God, you crucified and killed by the hands of those outside the law. 24 But God raised him up, having freed him from death, because it was impossible for him to be held in its power. 25 For David says concerning him, ‘I saw the Lord always before me, for he is at my right hand so that I will not be shaken; 26 therefore my heart was glad, and my tongue rejoiced; moreover my flesh will live in hope. 27 For you will not abandon my soul to Hades, or let your Holy One experience corruption. 28 You have made known to me the ways of life; you will make me full of gladness with your presence.’ 29 Fellow Israelites, I may say to you confidently of our ancestor David that he both died and was buried, and his tomb is with us to this day. 30 Since he was a prophet, he knew that God had sworn with an oath to him that he would put one of his descendants on his throne. 31 Foreseeing this, David spoke of the resurrection of the Messiah, saying, ‘He was not abandoned to Hades, nor did his flesh experience corruption.’ 32 This Jesus God raised up, and of that all of us are witnesses.

Psalm 16
Our psalm this morning is a psalm of trust in God.  In Hebrew the psalm begins with a single imperative word:  Protect!  Then follows the reasons for which the psalmist believes God should protect him or her.  It is verses 8-11 which Peter quotes in the sermon we have just heard. The Book of Common Prayer appoints these same words to be said at the grave in the Burial Service (p. 501).

1  Protect me, O God, for I take refuge in you; *
I have said to the Lord, “You are my Lord,
my good above all other.”
2  All my delight is upon the godly that are in the land, *
upon those who are noble among the people.
3  But those who run after other gods *
shall have their troubles multiplied.
4  Their libations of blood I will not offer, *
nor take the names of their gods upon my lips.
5 O Lord, you are my portion and my cup; *
it is you who uphold my lot.
6  My boundaries enclose a pleasant land; *
indeed, I have a goodly heritage.
7  I will bless the Lord who gives me counsel; *
my heart teaches me, night after night.
8  I have set the Lord always before me; *
because he is at my right hand I shall not fall.
9  My heart, therefore, is glad, and my spirit rejoices; *
my body also shall rest in hope.
10  For you will not abandon me to the grave, *
nor let your holy one see the Pit.
11  You will show me the path of life; *
in your presence there is fullness of joy,
and in your right hand are pleasures for evermore.

The Second Reading:  1 Peter 1:3-9
The First Letter of Peter was written to a group of Christians undergoing suffering, probably in one of the waves of persecution of the early Church by the Romans. We will read from this letter throughout Eastertide this year. It is also clear that Peter is writing to persons who had not been part of the original followers of Jesus, i.e., they had never seen Jesus. Peter exhorts his readers to embrace the “new birth” of their conversion and, therefore, the new life to which they are called despite their present sufferings.

1:3 Blessed be the God and Father of our Lord Jesus Christ! By his great mercy he has given us a new birth into a living hope through the resurrection of Jesus Christ from the dead, 4 and into an inheritance that is imperishable, undefiled, and unfading, kept in heaven for you, 5 who are being protected by the power of God through faith for a salvation ready to be revealed in the last time. 6 In this you rejoice, even if now for a little while you have had to suffer various trials, 7 so that the genuineness of your faith—being more precious than gold that, though perishable, is tested by fire—may be found to result in praise and glory and honor when Jesus Christ is revealed. 8 Although you have not seen him, you love him; and even though you do not see him now, you believe in him and rejoice with an indescribable and glorious joy, 9 for you are receiving the outcome of your faith, the salvation of your souls.

The Holy Gospel:  John 20:19-31
Our Gospel reading this morning is read every year on this Second Sunday of Easter (the only instance of a Gospel reading repeating year after year in the entire cycle of readings).  The reading is composed of two scenes.  The first is John’s account of the first appearance of the risen Jesus to the disciples. For John it is also the formation of the Church (including the gift of the Holy Spirit). Jesus’ forgiveness of the disciples is extraordinary given their betrayal and abandonment of him. Moreover, he also gives them the power of forgiveness! The second scene is the familiar story of Thomas, the disciple missing from the first appearance. Thomas needs physical proof, for which we can hardly blame him. The story is partially a set up for the important statement, “Blessed are those who have not seen and yet have come to believe.” Note that by “the Jews” in the first verse is meant the religious authorities, not all Jews.

20:19 When it was evening on that day, the first day of the week, and the doors of the house where the disciples had met were locked for fear of the Jews, Jesus came and stood among them and said, “Peace be with you.” 20 After he said this, he showed them his hands and his side. Then the disciples rejoiced when they saw the Lord. 21 Jesus said to them again, “Peace be with you. As the Father has sent me, so I send you.” 22 When he had said this, he breathed on them and said to them, “Receive the Holy Spirit. 23 If you forgive the sins of any, they are forgiven them; if you retain the sins of any, they are retained.” 24 But Thomas (who was called the Twin), one of the twelve, was not with them when Jesus came. 25 So the other disciples told him, “We have seen the Lord.” But he said to them, “Unless I see the mark of the nails in his hands, and put my finger in the mark of the nails and my hand in his side, I will not believe.” 26 A week later his disciples were again in the house, and Thomas was with them. Although the doors were shut, Jesus came and stood among them and said, “Peace be with you.” 27 Then he said to Thomas, “Put your finger here and see my hands. Reach out your hand and put it in my side. Do not doubt but believe.” 28 Thomas answered him, “My Lord and my God!” 29 Jesus said to him, “Have you believed because you have seen me? Blessed are those who have not seen and yet have come to believe.” 30 Now Jesus did many other signs in the presence of his disciples, which are not written in this book. 31 But these are written so that you may come to believe that Jesus is the Messiah, the Son of God, and that through believing you may have life in his name.

The Scripture quotations (except for the psalm) are from the New Revised Standard Version Bible, copyright © 1989 by the Division of Christian Education of the National Council of Churches of Christ in the U.S.A., and are used by permission.  All rights reserved.  The Collect of the Day and the Psalm translation are from The Book of Common Prayer.  Commentaries are copyright © 2017, Epiphany ESources, 67 E. Main St., Hornell, NY  14843, www.epiphanyesources.com. All rights reserved. Permission to copy and edit for church services is given, provided this attribution remains.
Posted by The Rev Michael W Hopkins at 11:11 AM