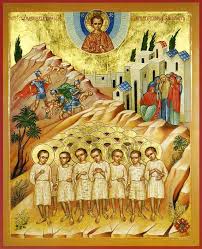 
O God, who wonderfully created, and yet more wonderfully restored, the dignity of human nature:  Grant that we may share the divine life of him who humbled himself to share our humanity, your Son Jesus Christ; who lives and reigns with you, in the unity of the Holy Spirit, one God, for ever and ever.  Amen.

Our first reading is from that portion of Jeremiah often called “the Book of Consolations.” In the midst of a very gloomy book, Jeremiah speaks words of hope and comfort.  Despite Israel’s life in exile there is reason to sing. God is faithful and acting.  This makes this text a Christmas reading.  The Incarnation is God’s fundamental act in creation for us.

31:7 For thus says the Lord: Sing aloud with gladness for Jacob, and raise shouts for the chief of the nations; proclaim, give praise, and say, “Save, O Lord, your people, the remnant of Israel.” 8 See, I am going to bring them from the land of the north, and gather them from the farthest parts of the earth, among them the blind and the lame, those with child and those in labor, together; a great company, they shall return here. 9 With weeping they shall come, and with consolations I will lead them back, I will let them walk by brooks of water, in a straight path in which they shall not stumble; for I have become a father to Israel, and Ephraim is my firstborn. 10 Hear the word of the Lord, O nations, and declare it in the coastlands far away; say, “He who scattered Israel will gather him, and will keep him as a shepherd a flock.” 11 For the Lord has ransomed Jacob, and has redeemed him from hands too strong for him. 12 They shall come and sing aloud on the height of Zion, and they shall be radiant over the goodness of the Lord, over the grain, the wine, and the oil, and over the young of the flock and the herd; their life shall become like a watered garden, and they shall never languish again. 13 Then shall the young women rejoice in the dance, and the young men and the old shall be merry. I will turn their mourning into joy, I will comfort them, and give them gladness for sorrow. 14 I will give the priests their fill of fatness, and my people shall be satisfied with my bounty, says the Lord.

Psalm 84 is a hymn of longing for the Temple. It may have been a song sung by pilgrims while journeying to celebrate the Feast of Booths (see Deuteronomy 16:13-15).  This song celebrates the nearness of God and the longing that comes from the heart of a pilgrim.

1 How dear to me is your dwelling, O Lord of hosts! *
My soul has a desire and longing for the courts of the Lord;
my heart and my flesh rejoice in the living God.

2 The sparrow has found her a house
and the swallow a nest where she may lay her young; *
by the side of your altars, O Lord of hosts, my King and my God.

3 Happy are they who dwell in your house! *
they will always be praising you.

4 Happy are the people whose strength is in you! *
whose hearts are set on the pilgrims’ way.

5 Those who go through the desolate valley will find it a place of springs, *
for the early rains have covered it with pools of water.

6 They will climb from height to height, *
and the God of gods will reveal himself in Zion.

8 Behold our defender, O God; *
and look upon the face of your Anointed.

1:3 Blessed be the God and Father of our Lord Jesus Christ, who has blessed us in Christ with every spiritual blessing in the heavenly places, 4 just as he chose us in Christ before the foundation of the world to be holy and blameless before him in love. 5 He destined us for adoption as his children through Jesus Christ, according to the good pleasure of his will, 6 to the praise of his glorious grace that he freely bestowed on us in the Beloved. 15 I have heard of your faith in the Lord Jesus and your love toward all the saints, and for this reason 16 I do not cease to give thanks for you as I remember you in my prayers. 17 I pray that the God of our Lord Jesus Christ, the Father of glory, may give you a spirit of wisdom and revelation as you come to know him, 18 so that, with the eyes of your heart enlightened, you may know what is the hope to which he has called you, what are the riches of his glorious inheritance among the saints, 19a and what is the immeasurable greatness of his power for us who believe.

Our Gospel reading is from the second half of Matthew’s Christmas story (the first half being the visit of the magi).  As the magi had been warned in a dream not to return to King Herod, now Joseph is warned to flee the king’s treachery.  The “Out of Egypt…” quote is from Hosea 11:1.  Then comes the worse that tyranny can dish out—the murder of innocent children (the skipped vv. 16-18).  Herod the Great died in 4 b.c.e. His son was as cruel as his father, although he was replaced as ruler in 6 b.c.e. by a Roman procurator.  Matthew eventually gets the family to Nazareth, where he and Luke agree Jesus was raised.  The quote about being a “Nazorean” has no known source.  Nazareth is not mentioned at all in the Hebrew Scripture.

This story is unique in that it is the only story in the canonical Gospels concerning Jesus’ childhood.  It is a curious story that attempts to sort out relationships.  Mary refers to “your father and I,” but Jesus refers to “my father’s house,” i.e. the Temple.  That they did not understand his meaning seems very odd considering their awareness of what was happening in all that precedes this passage.  Yet Jesus, even aware of his special relationship with God, is “obedient to them.”  Jesus’ growing awareness of himself did not lead to his challenging the basic order around him, at least until he begins to teach.  One is reminded of Philippians 2:5-11, “he humbled himself…”

2:41 Now every year Jesus’ parents went to Jerusalem for the festival of the Passover. 42 And when he was twelve years old, they went up as usual for the festival. 43 When the festival was ended and they started to return, the boy Jesus stayed behind in Jerusalem, but his parents did not know it. 44 Assuming that he was in the group of travelers, they went a day’s journey. Then they started to look for him among their relatives and friends. 45 When they did not find him, they returned to Jerusalem to search for him. 46 After three days they found him in the temple, sitting among the teachers, listening to them and asking them questions. 47 And all who heard him were amazed at his understanding and his answers. 48 When his parents saw him they were astonished; and his mother said to him, “Child, why have you treated us like this? Look, your father and I have been searching for you in great anxiety.” 49 He said to them, “Why were you searching for me? Did you not know that I must be in my Father's house?” 50 But they did not understand what he said to them. 51 Then he went down with them and came to Nazareth, and was obedient to them. His mother treasured all these things in her heart. 52 And Jesus increased in wisdom and in years, and in divine and human favor.

In Christmas pageants, elements of this story are tacked onto Luke’s story (2:1-20), but they are very different tales, and the visit of the Magi deserves to be known in all its richness.  The wise men (magoi in Greek) were likely astrologers or emissaries of foreign courts.  They were not “kings” (a later notion).  They also were not necessarily three in number.  The text does not give them a number; we have implied it from the three gifts.  Those gifts are highly symbolic in nature:  gold for a ruler, incense for a priest, myrrh for one who is to die.  Revelation comes to people in the first two chapters of Matthew’s Gospel via dreams (1:20, 2:12, 2:13, 2:19, 2:22).  The prophecy concerning Bethlehem is from Micah 5:2. That the wise men first went to Jerusalem to consult the current king was only natural, but the “king” they seek is of a very different nature.

2:1 In the time of King Herod, after Jesus was born in Bethlehem of Judea, wise men from the East came to Jerusalem, 2 asking, “Where is the child who has been born king of the Jews? For we observed his star at its rising, and have come to pay him homage.” 3 When King Herod heard this, he was frightened, and all Jerusalem with him; 4 and calling together all the chief priests and scribes of the people, he inquired of them where the Messiah was to be born. 5 They told him, “In Bethlehem of Judea; for so it has been written by the prophet:  6 ‘And you, Bethlehem, in the land of Judah, are by no means least among the rulers of Judah; for from you shall come a ruler who is to shepherd my people Israel.’” 7 Then Herod secretly called for the wise men and learned from them the exact time when the star had appeared. 8 Then he sent them to Bethlehem, saying, “Go and search diligently for the child; and when you have found him, bring me word so that I may also go and pay him homage.” 9 When they had heard the king, they set out; and there, ahead of them, went the star that they had seen at its rising, until it stopped over the place where the child was. 10 When they saw that the star had stopped, they were overwhelmed with joy. 11 On entering the house, they saw the child with Mary his mother; and they knelt down and paid him homage. Then, opening their treasure chests, they offered him gifts of gold, frankincense, and myrrh. 12 And having been warned in a dream not to return to Herod, they left for their own country by another road.

The Scripture quotations (except for the Psalms) are from the New Revised Standard Version Bible, copyright © 1989 by the Division of Christian Education of the National Council of Churches of Christ in the U.S.A.  All rights reserved.  The Collect and the Psalms are from The Book of Common Prayer.  Commentaries are by Epiphany ESources, 67 E. Main St., Hornell, NY 14843, www.epiphanyesources.com , copyright © 2020.  All rights reserved. Permission is given to copy for group study, with this attribution.

Posted by The Rev Michael W Hopkins at 11:11 AM