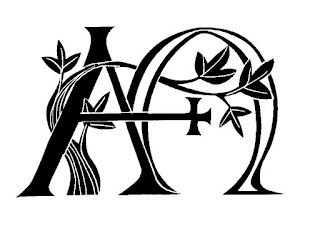 Throughout Eastertide this year we read from the Revelation to John.  The Revelation actually presents itself as a letter and our reading this morning is the salutation.

1st Reading: Acts of the Apostles 5:27-32
During Eastertide our first reading is from the Acts of the Apostles. Today’s reading is set in the context of the arrest of the apostles (5:17) by the high priest and the temple police.  During the night, however, they escaped, assisted by an angel.  They were found the next day in the temple precincts, teaching.  They were once again arrested, and the following scene occurs.  After this many wanted to kill them, but Gamaliel, a Pharisee on the council (the Sanhedrin), intervenes, arguing that if these men are of human origin they will fail, but if they are from God, nothing can stop them.  He prevailed and the apostles were let go after a flogging.  This passage has been used over the centuries to blame Jews for the death of Jesus. It is important to note here that Peter is speaking to the religious authorities here and not all Jews.

27 When [the temple police] had brought [the apostles], they had them stand before the council. The high priest questioned them, 28 saying, “We gave you strict orders not to teach in this name, yet here you have filled Jerusalem with your teaching and you are determined to bring this man's blood on us.” 29 But Peter and the apostles answered, “We must obey God rather than any human authority. 30 The God of our ancestors raised up Jesus, whom you had killed by hanging him on a tree. 31 God exalted him at his right hand as Leader and Savior that he might give repentance to Israel and forgiveness of sins. 32 And we are witnesses to these things, and so is the Holy Spirit whom God has given to those who obey him.”

Psalm 118:14-29
As a whole, Psalm 118 is one of Israel’s greatest sons of thanksgiving and praise. Psalm 118 has long been associated with Holy Week and Easter.  The Book of Common Prayer uses it on Palm Sunday, Easter Day, throughout Easter Week and now on this Second Sunday.  In addition, Psalms 113—118 are traditionally used during Passover.  All four Gospel writers use this psalm in regards to the triumphal entry of Jesus into Jerusalem. Matthew uses it again at 21:42.

14 The Lord is my strength and my song, *
and he has become my salvation.
15 There is a sound of exultation and victory *
in the tents of the righteous:
16 “The right hand of the Lord has triumphed! *
the right hand of the Lord is exalted!
the right hand of the Lord has triumphed!”
17 I shall not die, but live, *
and declare the works of the Lord.
18 The Lord has punished me sorely, *
but he did not hand me over to death.
19 Open for me the gates of righteousness; *
I will enter them; I will offer thanks to the Lord.
20 “This is the gate of the Lord; *
he who is righteous may enter.”
21 I will give thanks to you, for you answered me *
and have become my salvation.
22 The same stone which the builders rejected *
has become the chief cornerstone.
23 This is the Lord’s doing, *
and it is marvelous in our eyes.
24 On this day the Lord has acted; *
we will rejoice and be glad in it.
25 Hosannah, Lord, hosannah! *
Lord, send us now success.
26 Blessed is he who comes in the name of the Lord; *
we bless you from the house of the Lord.
27 God is the Lord; he has shined upon us; *
form a procession with branches up to the horns of the altar.
28 “You are my God, and I will thank you; *
you are my God, and I will exalt you.”
29 Give thanks to the Lord, for he is good; *
his mercy endures for ever.

Or this
Psalm 150
The last of the psalms is a song of praise.  It is a fitting conclusion to the psalter.  Every line contains the Hebrew hll, “praise.” The “timbrel” (v. 4) was a hand-held percussion instrument similar to a tambourine.

2nd Reading:  Revelation to John 1:4-8
Throughout Eastertide this year we read from the Revelation to John.  The Revelation actually presents itself as a letter and our reading this morning is the salutation.  As in many letter openings, several issues are identified that will be important for the work as a whole.  There are a number of descriptive titles for God and Jesus here, and they will be repeated and expanded upon later.  Jesus is described, for instance, as “the faithful witness,” and the theme of witnessing will come to the fore again and again in Revelation. Traditionally “John” is the same John the Evangelist and Apostle of the Gospel and the letters, but the potential date of Revelation’s initial writing and its location, point to some other writer.  This auther is often referred to as “John the Divine.” The beginning and ending letters of the Greek alphabet (Α and Ω) became a prominent early Christian symbol for Jesus (used twice more in Revelation at 21:6 and 22:13).

4 John to the seven churches that are in Asia: Grace to you and peace from him who is and who was and who is to come, and from the seven spirits who are before his throne, 5 and from Jesus Christ, the faithful witness, the firstborn of the dead, and the ruler of the kings of the earth. To him who loves us and freed us from our sins by his blood, 6 and made us to be a kingdom, priests serving his God and Father, to him be glory and dominion forever and ever. Amen. 7 Look! He is coming with the clouds; every eye will see him, even those who pierced him; and on his account all the tribes of the earth will wail. So it is to be. Amen. 8 “I am the Alpha and the Omega,” says the Lord God, “who is and who was and who is to come, the Almighty.”

Gospel Reading:  John 20:19-31
Our Gospel reading continues last week’s story in John’s Gospel of Jesus’ appearance to the disciples after the resurrection. Mary Magdalene has seen the Lord and has told the others as much. Yet they still are hidden in fear.  Jesus comes among them with a message of peace. Despite their betrayal and abandonment of him, they are forgiven and are gifted with the Spirit (this is the Gospel of John’s “Pentecost”).  They are to practice this forgiveness with others; this is central to the message they are to proclaim.  Thomas is not with them for this appearance (perhaps he alone is not afraid?) and demands to see for himself.  Once he does he believes as well.  Jesus then speaks of us, those who do not see and yet believe.

19 When it was evening on that day, the first day of the week, and the doors of the house where the disciples had met were locked for fear of the Jews, Jesus came and stood among them and said, “Peace be with you.” 20 After he said this, he showed them his hands and his side. Then the disciples rejoiced when they saw the Lord. 21 Jesus said to them again, “Peace be with you. As the Father has sent me, so I send you.” 22 When he had said this, he breathed on them and said to them, “Receive the Holy Spirit. 23 If you forgive the sins of any, they are forgiven them; if you retain the sins of any, they are retained.” 24 But Thomas (who was called the Twin), one of the twelve, was not with them when Jesus came. 25 So the other disciples told him, “We have seen the Lord.” But he said to them, “Unless I see the mark of the nails in his hands, and put my finger in the mark of the nails and my hand in his side, I will not believe.” 26 A week later his disciples were again in the house, and Thomas was with them. Although the doors were shut, Jesus came and stood among them and said, “Peace be with you.” 27 Then he said to Thomas, “Put your finger here and see my hands. Reach out your hand and put it in my side. Do not doubt but believe.” 28 Thomas answered him, “My Lord and my God!” 29 Jesus said to him, “Have you believed because you have seen me? Blessed are those who have not seen and yet have come to believe.” 30 Now Jesus did many other signs in the presence of his disciples, which are not written in this book. 31 But these are written so that you may come to believe that Jesus is the Messiah, the Son of God, and that through believing you may have life in his name.

The Scripture quotations (except for the psalm) are from the New Revised Standard Version Bible, copyright © 1989 by the Division of Christian Education of the National Council of Churches of Christ in the U.S.A., and are used by permission.  All rights reserved.  The Psalm translation is from The Book of Common Prayer.  Commentaries are copyright © 2016 Epiphany ESources, 67 E. Main St., Hornell, NY  14843. www.EpiphanyEsources.com. All rights reserved.  Permission is given to copy for group study.  Bulletin inserts are available. For more information, go to our website.

Posted by The Rev Michael W Hopkins at 10:01 AM