Day of Pentecost A Readings & Commentaries 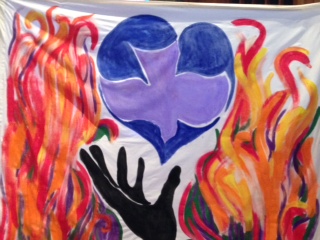 First Reading:  Acts 2:1-21
Our first reading is the story of the Spirit’s manifestation on the Day of Pentecost.  Pentecost was a major Jewish festival which occurred 50 days after Passover.  It is also known as the Feast of Weeks or Shavuot. The Holy Spirit’s falling on everyone is a different phenomenon than the Spirit’s falling on individuals in the Hebrew Scriptures (and usually for a set period of time). Peter’s speech includes an extended quote from the prophet Joel (2:28-32).

1 When the day of Pentecost had come, they were all together in one place. 2 And suddenly from heaven there came a sound like the rush of a violent wind, and it filled the entire house where they were sitting. 3 Divided tongues, as of fire, appeared among them, and a tongue rested on each of them. 4 All of them were filled with the Holy Spirit and began to speak in other languages, as the Spirit gave them ability. 5 Now there were devout Jews from every nation under heaven living in Jerusalem. 6 And at this sound the crowd gathered and was bewildered, because each one heard them speaking in the native language of each. 7Amazed and astonished, they asked, “Are not all these who are speaking Galileans? 8 And how is it that we hear, each of us, in our own native language? 9 Parthians, Medes, Elamites, and residents of Mesopotamia, Judea and Cappadocia, Pontus and Asia, 10 Phrygia and Pamphylia, Egypt and the parts of Libya belonging to Cyrene, and visitors from Rome, both Jews and proselytes, 11 Cretans and Arabs—in our own languages we hear them speaking about God’s deeds of power.” 12 All were amazed and perplexed, saying to one another, “What does this mean?” 13 But others sneered and said, “They are filled with new wine.” 14 But Peter, standing with the eleven, raised his voice and addressed them, “Men of Judea and all who live in Jerusalem, let this be known to you, and listen to what I say. 15 Indeed, these are not drunk, as you suppose, for it is only nine o’clock in the morning. 16 No, this is what was spoken through the prophet Joel:  17 ‘In the last days it will be, God declares, that I will pour out my Spirit upon all flesh, and your sons and your daughters shall prophesy, and your young men shall see visions, and your old men shall dream dreams. 18 Even upon my slaves, both men and women, in those days I will pour out my Spirit; and they shall prophesy. 19 And I will show portents in the heaven above and signs on the earth below, blood, and fire, and smoky mist. 20 The sun shall be turned to darkness and the moon to blood, before the coming of the Lord’s great and glorious day. 21 Then everyone who calls on the name of the Lord shall be saved.’”

First Reading:  Numbers 11:24-30
Wandering in the wilderness after the escape from Egypt, the people begin to complain. They are given the gift of manna, but it is not enough. They want meat, and Moses complains to God about the burden of leadership, which he alone bears. God’s answer is to create a larger circle of responsibility, seventy elders who are given a share of the spirit that rests on Moses.  In the Hebrew Scriptures, God’s Spirit is given only to certain people and for certain tasks. The prophesying by the two in the camp is troubling to Moses’ aides, but he is simply relieved to have help and utters the desire that all God’s people shared this spirit.

11:24 Moses went out and told the people the words of the Lord; and he gathered seventy elders of the people, and placed them all around the tent. 25 Then the Lord came down in the cloud and spoke to him, and took some of the spirit that was on him and put it on the seventy elders; and when the spirit rested upon them, they prophesied. But they did not do so again. 26 Two men remained in the camp, one named Eldad, and the other named Medad, and the spirit rested on them; they were among those registered, but they had not gone out to the tent, and so they prophesied in the camp. 27 And a young man ran and told Moses, “Eldad and Medad are prophesying in the camp.” 28 And Joshua son of Nun, the assistant of Moses, one of his chosen men, said, “My lord Moses, stop them!” 29 But Moses said to him, “Are you jealous for my sake? Would that all the Lord's people were prophets, and that the Lord would put his spirit on them!” 30 And Moses and the elders of Israel returned to the camp.

Psalm 104:25-35, 37b
Psalm 104 as a whole is a hymn to God as creator and sustainer of all life. Our portion today concludes the psalm with a reference to God’s taming of the sea (seen by ancient peoples as the source of chaos represented here by the sea monster “Leviathan,” which is God’s plaything). It also includes a reference to the Spirit of God.  “Breath” in verse 30 and “Spirit” in verse 31 are the same Hebrew word ruaḥ.

25 O Lord, how manifold are your works! *
in wisdom you have made them all;
the earth is full of your creatures.
26 Yonder is the great and wide sea
with its living things too many to number, *
creatures both small and great.
27 There move the ships, and there is that Leviathan, *
which you have made for the sport of it.
28 All of them look to you *
to give them their food in due season.
29 You give it to them; they gather it; *
you open your hand, and they are filled with good things.
30 You hide your face, and they are terrified; *
you take away their breath,
and they die and return to their dust.
31 You send forth your Spirit, and they are created; *
and so you renew the face of the earth.
32 May the glory of the Lord endure for ever; *
may the Lord rejoice in all his works.
33 He looks at the earth and it trembles; *
he touches the mountains and they smoke.
34 I will sing to the Lord as long as I live; *
I will praise my God while I have my being.
35 May these words of mine please him; *
I will rejoice in the Lord.  [37b] Hallelujah!

Second Reading:  1 Corinthians 12:3b-13
Paul has begun chapter 12 introducing some teaching about “spiritual gifts.” There clearly was a problem with the Corinthian community about the nature of these gifts, and whether or not there was a hierarchy of gifts (and, therefore, of the people who had them). Paul is adamant that all are given gifts by the same Spirit and for the purpose of building up the church, which is one body. He recalls their baptisms, which erased the distinctions between them.

Gospel Reading:  John 7:37-39
Jesus is in Jerusalem with his disciples for the autumn Feast of Booths (Sukkot), commemorating the wandering in the wilderness. Part of this week-long festival was the carrying of water from the Pool of Siloam to the Temple, a remembrance of the water that flowed from the rock (Numbers 20:2-13). Jesus uses that image to proclaim himself as that very water, living and giving life. The quote in verse 38 has an unknown origin (there is a general sense of it in Isaiah 44:3, 58:11, and Proverbs 18:4).

7:37 On the last day of the festival, the great day, while Jesus was standing there, he cried out, “Let anyone who is thirsty come to me, 38 and let the one who believes in me drink. As the scripture has said, ‘Out of the believer’s heart shall flow rivers of living water.’” 39 Now he said this about the Spirit, which believers in him were to receive; for as yet there was no Spirit, because Jesus was not yet glorified.

Gospel Reading:  John 20:19-23
John’s version of the gift of the Holy Spirit is very different from Luke’s in the Acts of the Apostles. It happens on Easter evening, in the context of Jesus’ first appearance to his disciples. He comes in peace to those who had abandoned him, and gives them a gift in a way that is supposed to remind us of Genesis 1:1-2 when God’s breath first calls the creation into being (remembering that “breath,” “wind,” and “spirit” are the same word in Hebrew). He also leaves them with the power of forgiveness. The power to “retain” may not be so much a power as a warning. Withholding forgiveness is a serious matter given the imperative of the Gospel to forgive.

20:19 When it was evening on that day, the first day of the week, and the doors of the house where the disciples had met were locked for fear of the Jews, Jesus came and stood among them and said, “Peace be with you.” 20 After he said this, he showed them his hands and his side. Then the disciples rejoiced when they saw the Lord. 21 Jesus said to them again, “Peace be with you. As the Father has sent me, so I send you.” 22 When he had said this, he breathed on them and said to them, “Receive the Holy Spirit. 23 If you forgive the sins of any, they are forgiven them; if you retain the sins of any, they are retained.”

The Scripture quotations (except for the psalm) are from the New Revised Standard Version Bible, copyright © 1989 by the Division of Christian Education of the National Council of Churches of Christ in the U.S.A., and are used by permission.  All rights reserved.  The Collect of the Day and the Psalm translation are from The Book of Common Prayer.  Commentaries are copyright © 2017 Epiphany ESources, 67 E. Main St., Hornell, NY 14843. www.EpiphanyEsources.com. All rights reserved. Permission is given to copy for congregational use with this attribution.
Posted by The Rev Michael W Hopkins at 2:08 PM