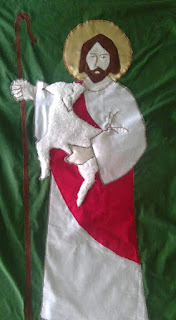 O God, whose Son Jesus is the good shepherd of your people:  Grant that when we hear his voice we may know him who calls us each by name, and follow where he leads; who, with you and the Holy Spirit, lives and reigns, one God, for ever and ever. Amen.

The story of Dorcas (or “Tabitha”—an Aramaic name; both meaning “gazelle”) is our next reading from the Acts of the Apostles this Eastertide.  That Peter raises her from the dead shows that Jesus’ power has been handed on to his disciples.  Dorcas appears to have been part of a guild of widows known for their works of charity. Joppa was a Palestinian harbor town near present-day Tel Aviv.

9:36 Now in Joppa there was a disciple whose name was Tabitha, which in Greek is Dorcas. She was devoted to good works and acts of charity. 37 At that time she became ill and died. When they had washed her, they laid her in a room upstairs. 38 Since Lydda was near Joppa, the disciples, who heard that Peter was there, sent two men to him with the request, “Please come to us without delay.” 39 So Peter got up and went with them; and when he arrived, they took him to the room upstairs. All the widows stood beside him, weeping and showing tunics and other clothing that Dorcas had made while she was with them. 40 Peter put all of them outside, and then he knelt down and prayed. He turned to the body and said, “Tabitha, get up.” Then she opened her eyes, and seeing Peter, she sat up. 41 He gave her his hand and helped her up. Then calling the saints and widows, he showed her to be alive. 42 This became known throughout Joppa, and many believed in the Lord. 43 Meanwhile he stayed in Joppa for some time with a certain Simon, a tanner.

The most familiar of psalms is ascribed to King David.  It is a song of ultimate trust in God.  “The valley of the shadow of death” is literally, “the darkest valley,” so can apply to any situation of danger or encounter with evil.  God can be trusted to be with us actively in all circumstances.

2 He makes me lie down in green pastures, *
and leads me beside still waters.

3 He revives my soul, *
and guides me along right pathways for his Name’s sake.

4 Though I walk through the valley of the shadow of death,
I will fear no evil; *
for you are with me;
your rod and your staff, they comfort me.

5 You spread a table before me in the presence of those who trouble me; *
you have anointed my head with oil,
and my cup is running over.

6 Surely your goodness and mercy shall follow me
all the days of my life;
and I will dwell in the house of the Lord for ever.

The scroll which in last week’s reading had been given to the Lamb to open, has had six of its seven seals opened.  There is great anticipation and fear about the opening of the last seal.  Chapter six ends, “For the great day of their wrath has come, and who is able to stand?”  In chapter seven, before the opening of the last seal (8:1), that question is answered:  God’s people will be rescued.  Revelation 7:9-17 is a vision of that rescue, and it is true even for those who have been martyred.  The end of the scene borrows from visions of the prophet Isaiah (see especially Isaiah 25:8).  Note as well the paradox of the Lamb who is also the Shepherd.

7:9 After this I looked, and there was a great multitude that no one could count, from every nation, from all tribes and peoples and languages, standing before the throne and before the Lamb, robed in white, with palm branches in their hands. 10 They cried out in a loud voice, saying, “Salvation belongs to our God who is seated on the throne, and to the Lamb!” 11 And all the angels stood around the throne and around the elders and the four living creatures, and they fell on their faces before the throne and worshiped God, 12 singing, “Amen! Blessing and glory and wisdom and thanksgiving and honor and power and might be to our God forever and ever! Amen.” 13 Then one of the elders addressed me, saying, “Who are these, robed in white, and where have they come from?” 14 I said to him, “Sir, you are the one that knows.” Then he said to me, “These are they who have come out of the great ordeal; they have washed their robes and made them white in the blood of the Lamb. 15 For this reason they are before the throne of God, and worship him day and night within his temple, and the one who is seated on the throne will shelter them. 16 They will hunger no more, and thirst no more; the sun will not strike them, nor any scorching heat; 17 for the Lamb at the center of the throne will be their shepherd, and he will guide them to springs of the water of life, and God will wipe away every tear from their eyes.”

The Fourth Sunday of Easter is often called “Good Shepherd Sunday” because we always read from the tenth chapter of John in which Jesus calls himself the Good Shepherd.  Our passage this morning tells us we are at the Feast of the Dedication (modern-day Hanukkah).  Jesus, like many of his fellow Jews, was in Jerusalem and in the Temple.  The authorities try to goad Jesus.  “Why do you keep us in suspense” is literally, “why do you keep annoying us.”  Jesus speaks around the question as usual, although ends in a bald-faced statement—“the Father and I are one.”  This was blasphemy without question.

10:22 At that time the festival of the Dedication took place in Jerusalem. It was winter, 23 and Jesus was walking in the temple, in the portico of Solomon. 24 So the Jews gathered around him and said to him, “How long will you keep us in suspense? If you are the Messiah, tell us plainly.” 25 Jesus answered, “I have told you, and you do not believe. The works that I do in my Father’s name testify to me; 26 but you do not believe, because you do not belong to my sheep. 27 My sheep hear my voice. I know them, and they follow me. 28 I give them eternal life, and they will never perish. No one will snatch them out of my hand. 29 What my Father has given me is greater than all else, and no one can snatch it out of the Father’s hand. 30 The Father and I are one.”

Posted by The Rev Michael W Hopkins at 4:36 PM