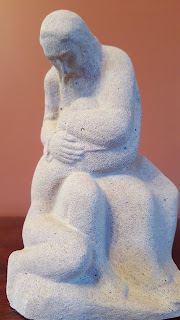 Gracious Father, whose blessed Son Jesus Christ came down from heaven to be the true bread which gives life to the world:  Evermore give us this bread, that he may live in us, and we in him; who lives and reigns with you and the Holy Spirit, one God, now and for ever.  Amen.

The book of Joshua picks up the story of the Israelite tribes’ entrance into the promised land after the death of Moses. Once they have arrived, they celebrate the Passover.  After this celebration, the food that had sustained them in the wilderness ceases and the promise is fulfilled as they eat the produce of the land.  All of these are signs that Israel’s disgrace in Egypt has become grace in Canaan.

5:9 The Lord said to Joshua, “Today I have rolled away from you the disgrace of Egypt.” And so that place is called Gilgal to this day. 10 While the Israelites were camped in Gilgal they kept the passover in the evening on the fourteenth day of the month in the plains of Jericho. 11 On the day after the passover, on that very day, they ate the produce of the land, unleavened cakes and parched grain. 12 The manna ceased on the day they ate the produce of the land, and the Israelites no longer had manna; they ate the crops of the land of Canaan that year.

Psalm 32 is a song of thanksgiving for the forgiveness of sins.  The psalm testifies that confession of sin leads to happiness (or blessedness) in an immediate sense. This psalm is connected by some scholars to David’s confession after the Uriah-Bathsheba incident, where, in the space of one verse (2 Samuel 12:13), David confesses his guilt and the prophet Nathan says, “Now the Lord has put away all your sin.”

1 Happy are they whose transgressions are forgiven, *
and whose sin is put away!

2 Happy are they to whom the Lord imputes no guilt, *
and in whose spirit there is no guile!

3 While I held my tongue, my bones withered away, *
because of my groaning all day long.

4 For your hand was heavy upon me day and night; *
my moisture was dried up as in the heat of summer.

5 Then I acknowledged my sin to you, *
and did not conceal my guilt.

6 I said, “I will confess my transgressions to the Lord.” *
Then you forgave me the guilt of my sin.

7 Therefore all the faithful will make their prayers to you in time of trouble; *
when the great waters overflow, they shall not reach them.

8 You are my hiding-place;
you preserve me from trouble; *
you surround me with shouts of deliverance.

9 “I will instruct you and teach you in the way that you should go; *
I will guide you with my eye.

10 Do not be like horse or mule, which have no understanding; *
who must be fitted with bit and bridle,
or else they will not stay near you.”

11 Great are the tribulations of the wicked; *
but mercy embraces those who trust in the Lord.

12 Be glad, you righteous, and rejoice in the Lord; *
shout for joy, all who are true of heart.

The word “therefore” at the beginning of this reading begs the question of what has come before it.  In chapter five, Paul speaks of the hardships he has endured, and that he expects all followers of Jesus will endure. These hardships, though very real, do not cause him to lose faith. He remains confident in God’s purposes for him and us.  Verse 14 begins, “For the love of Christ urges us on,” because of the conviction that one has died and is risen so that we might live, and not only live, but live for others. This leads into the following verses which emphasize the ministry of reconciliation to which all of us are called.  Thus, the Catechism of The Book of Common Prayer teaches that it is the church’s primary mission “to restore all people to unity with God and each other in Christ” (p. 855).

5:16 From now on, therefore, we regard no one from a human point of view; even though we once knew Christ from a human point of view, we know him no longer in that way. 17 So if anyone is in Christ, there is a new creation: everything old has passed away; see, everything has become new! 18 All this is from God, who reconciled us to himself through Christ, and has given us the ministry of reconciliation; 19 that is, in Christ God was reconciling the world to himself, not counting their trespasses against them, and entrusting the message of reconciliation to us. 20 So we are ambassadors for Christ, since God is making his appeal through us; we entreat you on behalf of Christ, be reconciled to God. 21 For our sake he made him to be sin who knew no sin, so that in him we might become the righteousness of God.

The “Parable of the Prodigal Son” might just as easily be called “The Parable of the Forgiving Father,” for it is the action of the father in the story that Jesus is emphasizing.  That the father’s easy acceptance of the younger son’s return was a scandal to the older brother is what we are called upon to consider. The company that Jesus kept was a scandal to the pious of his day. The Gospel is not a morality play, but the record of a God who cannot help loving his children, even those at whom the world looks askance.  The skipped verses are two shorter parables with the same message.

1 Now all the tax collectors and sinners were coming near to listen to Jesus. 2 And the Pharisees and the scribes were grumbling and saying, “This fellow welcomes sinners and eats with them.” 3 So he told them this parable: 11b “There was a man who had two sons. 12 The younger of them said to his father, ‘Father, give me the share of the property that will belong to me.’ So he divided his property between them. 13 A few days later the younger son gathered all he had and traveled to a distant country, and there he squandered his property in dissolute living. 14 When he had spent everything, a severe famine took place throughout that country, and he began to be in need. 15 So he went and hired himself out to one of the citizens of that country, who sent him to his fields to feed the pigs. 16 He would gladly have filled himself with the pods that the pigs were eating; and no one gave him anything. 17 But when he came to himself he said, ‘How many of my father’s hired hands have bread enough and to spare, but here I am dying of hunger! 18 I will get up and go to my father, and I will say to him, “Father, I have sinned against heaven and before you; 19 I am no longer worthy to be called your son; treat me like one of your hired hands.”’ 20 So he set off and went to his father. But while he was still far off, his father saw him and was filled with compassion; he ran and put his arms around him and kissed him. 21 Then the son said to him, ‘Father, I have sinned against heaven and before you; I am no longer worthy to be called your son.’ 22 But the father said to his slaves, ‘Quickly, bring out a robe—the best one—and put it on him; put a ring on his finger and sandals on his feet. 23 And get the fatted calf and kill it, and let us eat and celebrate; 24 for this son of mine was dead and is alive again; he was lost and is found!’ And they began to celebrate. 25 Now his elder son was in the field; and when he came and approached the house, he heard music and dancing. 26 He called one of the slaves and asked what was going on. 27 He replied, ‘Your brother has come, and your father has killed the fatted calf, because he has got him back safe and sound.’ 28 Then he became angry and refused to go in. His father came out and began to plead with him. 29 But he answered his father, ‘Listen! For all these years I have been working like a slave for you, and I have never disobeyed your command; yet you have never given me even a young goat so that I might celebrate with my friends. 30 But when this son of yours came back, who has devoured your property with prostitutes, you killed the fatted calf for him!’ 31 Then the father said to him, ‘Son, you are always with me, and all that is mine is yours. 32 But we had to celebrate and rejoice, because this brother of yours was dead and has come to life; he was lost and has been found.’”

The Scripture quotations (except for the Psalm) are from the New Revised Standard Version Bible, copyright © 1989 by the Division of Christian Education of the National Council of Churches of Christ in the U.S.A.  All rights reserved.  The Collect of the Day and the Psalm translation are from The Book of Common Prayer.  Commentaries are copyright © 2022 Epiphany ESources, 67 E. Main St., Hornell, NY 14843. www.EpiphanyEsources.com. All rights reserved. Permission is given to copy for group study.

Posted by The Rev Michael W Hopkins at 6:13 PM