6 Pentecost 2021, Proper 9B Readings with Commentaries 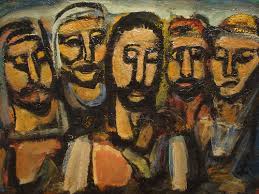 
O God, you have taught us to keep all your commandments by loving you and our neighbor:  Grant us the grace of your Holy Spirit, that we may be devoted to you with our whole heart, and united to one another with pure affection; through Jesus Christ our Lord, who lives and reigns with you and the Holy Spirit, one God, for ever and ever. Amen.

The first five chapters of 2 Samuel tell the story of David consolidating his power, and finally being accepted as king by the elders of Israel.  At the time of this acceptance, Hebron was Israel’s capitol. (Hebron is about 20 miles south of Jerusalem).  Jerusalem was still held by a Canaanite tribe called the Jebusites.  David conquered it and claimed it as his capitol.  This was strategic in that it was neutral territory, not previously held by the Israelites, and stood between the two groups of tribes that had emerged, Judah and Israel.

5:1 All the tribes of Israel came to David at Hebron, and said, “Look, we are your bone and flesh. 2 For some time, while Saul was king over us, it was you who led out Israel and brought it in. The Lord said to you: It is you who shall be shepherd of my people Israel, you who shall be ruler over Israel.” 3 So all the elders of Israel came to the king at Hebron; and King David made a covenant with them at Hebron before the Lord, and they anointed David king over Israel. 4 David was thirty years old when he began to reign, and he reigned forty years. 5 At Hebron he reigned over Judah seven years and six months; and at Jerusalem he reigned over all Israel and Judah thirty-three years. 9 David occupied the stronghold [of Jerusalem], and named it the city of David. David built the city all around from the Millo inward. 10 And David became greater and greater, for the Lord, the God of hosts, was with him.

Psalm 48 is a hymn of praise to the God who dwells in Zion (Jerusalem).  Mount Zion is one of the hills on which Jerusalem is built.  The heathen may attack God’s city, but it will not be overthrown.  The psalm ends with the call for a procession around the great city.


1 Great is the Lord, and highly to be praised; *
in the city of our God is his holy hill.

2 Beautiful and lofty, the joy of all the earth, is the hill of Zion, *
the very center of the world and the city of the great King.

3 God is in her citadels; *
he is known to be her sure refuge.

4 Behold, the kings of the earth assembled *
and marched forward together.

5 They looked and were astounded; *
they retreated and fled in terror.

6 Trembling seized them there; *
they writhed like a woman in childbirth,
like ships of the sea when the east wind shatters them.

7 As we have heard, so have we seen,
in the city of the Lord of hosts, in the city of our God; *
God has established her for ever.

8 We have waited in silence on your loving-kindness, O God, *
in the midst of your temple.

9 Your praise, like your Name, O God, reaches to the world’s end; *
your right hand is full of justice.

10 Let Mount Zion be glad and the cities of Judah rejoice, *
because of your judgments.

11 Make the circuit of Zion;
walk round about her; *
count the number of her towers.

12 Consider well her bulwarks;
examine her strongholds; *
that you may tell those who come after.

13 This God is our God for ever and ever; *
he shall be our guide for evermore.

This is one of the few readings from Ezekiel in the lectionary.  It is a portion of his call story which includes all of chapters one, two, and three.  Ezekiel was a prophet during the exile. He was probably in the first wave of exiles in 597 b.c.e. (There were three waves, the other two in 586 and 581). Here Ezekiel is given the prophetic credentials:  to speak on behalf of God. “Mortal” in Hebrew is ben ‘adam, literally “Son of Man,” which would be Jesus’ favorite title for himself, especially in Mark’s Gospel.

2:1 The Lord said to me: O mortal, stand up on your feet, and I will speak with you. 2 And when he spoke to me, a spirit entered into me and set me on my feet; and I heard him speaking to me. 3 He said to me, Mortal, I am sending you to the people of Israel, to a nation of rebels who have rebelled against me; they and their ancestors have transgressed against me to this very day. 4 The descendants are impudent and stubborn. I am sending you to them, and you shall say to them, “Thus says the Lord God.” 5 Whether they hear or refuse to hear (for they are a rebellious house), they shall know that there has been a prophet among them.

Psalm 123 is one of the Songs of Ascents (Pss. 120-134), which may have been sung by pilgrims on their way to celebrate a festival in Jerusalem. In this short psalm, the plea for mercy occurs three times. Verse two contains one of the few female images of God in the Old Testament (see Isaiah 49:14-16)

3 So our eyes look to the Lord our God, *
until he show us his mercy.

4 Have mercy upon us, O Lord, have mercy, *
for we have had more than enough of contempt,

5 Too much the scorn of the indolent rich, *
and of the derision of the proud.

In much of Second Corinthians Paul deals with the Corinthians having been taken in by a group of rival missionaries who are very critical of Paul, calling him weak and ineffective.  Paul defends himself vigorously, especially in chapters 11 and 12.  As this passage begins, Paul refers to someone who had an incredible spiritual experience.  Is Paul is speaking of himself?  In Paul’s day there were thought to be three “levels” of heaven, the third being the highest, the experience of pure ecstasy.  But it is not this experience in which he will boast. He boasts only in his weakness because it is this very weakness that is his sharing in the power of Christ.  This passage includes his well-known comment on the “thorn” in his flesh, an ailment about which there has been much speculation, although there is no way of knowing what it was.

In our Gospel reading Jesus returns home to Nazareth and is not well received. He is too well known to be taken seriously.  He then teaches in nearby villages and, for the first time, sends the twelve disciples out on their own.  Given his own experience in Nazareth, he warns them to expect rejection, but to simply move on when they do.  They are successful in exercising his authority to heal. Note the ancient use of oil in prayers for healing, a practice we continue to this day.

6:1 Jesus came to his hometown, and his disciples followed him. 2 On the sabbath he began to teach in the synagogue, and many who heard him were astounded. They said, “Where did this man get all this? What is this wisdom that has been given to him? What deeds of power are being done by his hands! 3 Is not this the carpenter, the son of Mary and brother of James and Joses and Judas and Simon, and are not his sisters here with us?” And they took offense at him. 4 Then Jesus said to them, “Prophets are not without honor, except in their hometown, and among their own kin, and in their own house.” 5 And he could do no deed of power there, except that he laid his hands on a few sick people and cured them. 6 And he was amazed at their unbelief. Then he went about among the villages teaching. 7 He called the twelve and began to send them out two by two, and gave them authority over the unclean spirits. 8 He ordered them to take nothing for their journey except a staff; no bread, no bag, no money in their belts; 9 but to wear sandals and not to put on two tunics. 10 He said to them, “Wherever you enter a house, stay there until you leave the place. 11 If any place will not welcome you and they refuse to hear you, as you leave, shake off the dust that is on your feet as a testimony against them.” 12 So they went out and proclaimed that all should repent. 13 They cast out many demons, and anointed with oil many who were sick and cured them.

Posted by The Rev Michael W Hopkins at 5:19 PM