Last Epiphany B Readings with Commentaries 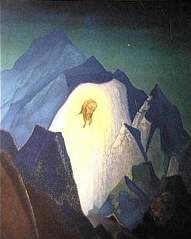 O God, who before the passion of your only-begotten Son revealed his glory upon the holy mountain:  Grant to us that we, beholding by faith the light of his countenance, may be strengthened to bear our cross, and be changed into his likeness from glory to glory; who lives and reigns with you and the Holy Spirit, one God, for ever and ever. Amen.

Our first reading is the story of the prophet Elijah’s ascent into heaven and the testing and succession of his protégé, Elisha. The lead-up to Elijah’s ascension is somewhat comical, showing the persistence of Elisha, and his boldness in asking for a double share. The story makes Elijah the greatest of Israel’s prophets—he does not die but is bodily assumed.  Because of this story, there was an expectation in Israel that he would one-day return.  The same was thought by some of Moses, hence their appearance in our Gospel reading.

Our psalm is a vision of God’s glory.  In these beginning verses, God summons the earth to reveal himself “out of Zion.”  The scene set is reminiscent of the summons in Isaiah 25:6ff.

1 The Lord, the God of gods, has spoken; *
he has called the earth from the rising of the sun to its setting.

2 Out of Zion, perfect in its beauty, *
God reveals himself in glory.

3 Our God will come and will not keep silence; *
before him there is a consuming flame,
and round about him a raging storm.

4 He calls the heavens and the earth from above *
to witness the judgment of his people.

5 “Gather before me my loyal followers, *
those who have made a covenant with me and sealed it with sacrifice.”

6 Let the heavens declare the rightness of his cause; *
for God himself is judge.

Two references to “the glory of Christ” make this reading a good choice to pair with the story of the Transfiguration. Paul desires that the Corinthians “pierce the veil” to find the glory shining in their hearts—the glory of God as shone forth in Jesus Christ.

4:3 If our gospel is veiled, it is veiled to those who are perishing. 4 In their case the god of this world has blinded the minds of the unbelievers, to keep them from seeing the light of the gospel of the glory of Christ, who is the image of God. 5 For we do not proclaim ourselves; we proclaim Jesus Christ as Lord and ourselves as your slaves for Jesus’ sake. 6 For it is the God who said, “Let light shine out of darkness,” who has shone in our hearts to give the light of the knowledge of the glory of God in the face of Jesus Christ.

As throughout his Gospel, Mark tells the story of Jesus’ transfiguration simply but vividly. “Such as no one on earth could bleach them,” is a detail that is his alone among the Gospel writers. The transfiguration culminates and affirms Jesus’ ministry. He is the prophet both like Moses and like the great Elijah.  But Jesus knows this moment is just for them for now—it will not be understood correctly without his subsequent death and resurrection.  It is those events from which his glory truly comes.

9:2 Six days later, Jesus took with him Peter and James and John, and led them up a high mountain apart, by themselves. And he was transfigured before them, 3 and his clothes became dazzling white, such as no one on earth could bleach them. 4 And there appeared to them Elijah with Moses, who were talking with Jesus. 5 Then Peter said to Jesus, “Rabbi, it is good for us to be here; let us make three dwellings, one for you, one for Moses, and one for Elijah.” 6 He did not know what to say, for they were terrified. 7 Then a cloud overshadowed them, and from the cloud there came a voice, “This is my Son, the Beloved; listen to him!” 8 Suddenly when they looked around, they saw no one with them any more, but only Jesus. 9 As they were coming down the mountain, he ordered them to tell no one about what they had seen, until after the Son of Man had risen from the dead.

The Scripture quotations (except for the Psalm) are from the New Revised Standard Version Bible, copyright © 1989 by the Division of Christian Education of the National Council of Churches of Christ in the U.S.A.  All rights reserved.  The Collect and the Psalm translation are from The Book of Common Prayer.  Commentaries are by Epiphany ESources, E. Main St., Hornell, NY 14843, www.epiphanyesources.com , copyright © 2021.  All rights reserved. Permission is given to copy for group study with this attribution.

Posted by The Rev Michael W Hopkins at 1:15 PM