10 Pentecost 2020, Proper 14A Readings with Commentaries 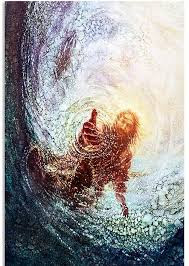 Grant to us, Lord, we pray, the spirit to think and do always those things that are right, that we, who cannot exist without you, may by you be enabled to live according to your will; through Jesus Christ our Lord, who lives and reigns with you and the Holy Spirit, one God, for ever and ever. Amen.

Jacob ends up with 12 sons and 1 daughter by his four wives. Because of his deep love for Rachel, he holds a special love for her two children, Joseph and Benjamin (who happened also to be his last two sons). The “long robe with sleeves” is a more direct translation than the more well-known “coat of many colors.” We skip the portion of this story in which Joseph interprets dreams in which he always happens to come out on top of his older brothers. His brothers thus resolve to be rid of him, although Reuben and Judah, conspire against killing him. He is sold into slavery. The story ends in pointing us to Egypt, which will loom large in the continuing story.

37:1 Jacob settled in the land where his father had lived as an alien, the land of Canaan. 2 This is the story of the family of Jacob. Joseph, being seventeen years old, was shepherding the flock with his brothers; he was a helper to the sons of Bilhah and Zilpah, his father’s wives; and Joseph brought a bad report of them to their father. 3 Now Israel loved Joseph more than any other of his children, because he was the son of his old age; and he had made him a long robe with sleeves. 4 But when his brothers saw that their father loved him more than all his brothers, they hated him, and could not speak peaceably to him. 12 Now his brothers went to pasture their father’s flock near Shechem. 13 And Israel said to Joseph, “Are not your brothers pasturing the flock at Shechem? Come, I will send you to them.” He answered, “Here I am.” 14 So he said to him, “Go now, see if it is well with your brothers and with the flock; and bring word back to me.” So he sent him from the valley of Hebron. He came to Shechem, 15 and a man found him wandering in the fields; the man asked him, “What are you seeking?” 16 “I am seeking my brothers,” he said; “tell me, please, where they are pasturing the flock.” 17 The man said, “They have gone away, for I heard them say, ‘Let us go to Dothan.’” So Joseph went after his brothers, and found them at Dothan. 18 They saw him from a distance, and before he came near to them, they conspired to kill him. 19 They said to one another, “Here comes this dreamer. 20 Come now, let us kill him and throw him into one of the pits; then we shall say that a wild animal has devoured him, and we shall see what will become of his dreams.” 21 But when Reuben heard it, he delivered him out of their hands, saying, “Let us not take his life.” 22 Reuben said to them, “Shed no blood; throw him into this pit here in the wilderness, but lay no hand on him”—that he might rescue him out of their hand and restore him to his father. 23 So when Joseph came to his brothers, they stripped him of his robe, the long robe with sleeves that he wore; 24 and they took him and threw him into a pit. The pit was empty; there was no water in it. 25 Then they sat down to eat; and looking up they saw a caravan of Ishmaelites coming from Gilead, with their camels carrying gum, balm, and resin, on their way to carry it down to Egypt. 26 Then Judah said to his brothers, “What profit is it if we kill our brother and conceal his blood? 27 Come, let us sell him to the Ishmaelites, and not lay our hands on him, for he is our brother, our own flesh.” And his brothers agreed. 28 When some Midianite traders passed by, they drew Joseph up, lifting him out of the pit, and sold him to the Ishmaelites for twenty pieces of silver. And they took Joseph to Egypt.

Psalm 105 is one of the historical psalms, which recite Israel’s past (the others are 78, 106, 135, and 136). They seek to portray the history of Israel as the history of the Lord’s relationship with his chosen people. This portion of Psalm 105 includes commentary on the story of Joseph.

make known his deeds among the peoples.

and speak of all his marvelous works.

let the hearts of those who seek the Lord rejoice.

his wonders and the judgments of his mouth.

O children of Jacob his chosen.

and destroyed the supply of bread.

Joseph, who was sold as a slave.

his neck they put in an iron collar.

the word of the Lord tested him.

the ruler of the peoples set him free.

as a ruler over all his possessions,

22    To instruct his princes according to his will *

and to teach his elders wisdom. [45c] Hallelujah!

The prophet Elijah has just defeated and destroyed the prophets of Baal, the god whom King Ahab of Israel and Jezebel, his queen, worship. Jezebel promises revenge, so Elijah flees into the wilderness and is miraculously fed, the Lord ignoring his fear and his plea for death. Next Elijah takes refuge in a cave. What happens to Elijah in the wilderness and on the mountain is meant to parallel things that happen to Moses, raising Elijah’s status among the prophets of the Lord (see the Transfiguration story in the gospels, such as Luke 9:28-26). The Hebrew in verse 12 is very difficult, hence some translations read “still small voice.” Silence is probably more correct. Elijah reiterates his despair, which the Lord again ignores, saying only, “Go back.” Mission trumps fear.

“Restore us again,” is the plea at the beginning of this psalm, and in glorious language and imagery the restoration is spoken into being. The nouns used in verse ten are among the most significant in biblical thought, and in Hebrew their meaning is rich:  ḥesed (mercy, steadfast love) and ‘emet (truth), ṣedāqâ (righteousness, justice) and shālôm (peace, well-being).

for he is speaking peace to his faithful people

and to those who turn their hearts to him.

that his glory may dwell in our land.

righteousness and peace have kissed each other.

and righteousness shall look down from heaven.

and our land will yield its increase.

and peace shall be a pathway for his feet.

In this passage, Paul uses the interpretive technique of “midrash,” a creative use of scriptural texts to elucidate one another and arrive at fresh meaning.  He begins with Leviticus 18:5, which he interprets by use of Deuteronomy 30:11-14. Verse 11 quotes Isaiah 28:16, verse 13 Joel 2:32, and finally Isaiah 52:17.  All of this in the service of his understanding of the Gospel: without distinction all who call on the name of Jesus will be saved.

10:5 Moses writes concerning the righteousness that comes from the law, that “the person who does these things will live by them.” 6 But the righteousness that comes from faith says, “Do not say in your heart, ‘Who will ascend into heaven?’” (that is, to bring Christ down) 7 “or ‘Who will descend into the abyss?’” (that is, to bring Christ up from the dead)”. 8 But what does it say? “The word is near you, on your lips and in your heart” (that is, the word of faith that we proclaim); 9 because if you confess with your lips that Jesus is Lord and believe in your heart that God raised him from the dead, you will be saved. 10 For one believes with the heart and so is justified, and one confesses with the mouth and so is saved. 11 The scripture says, “No one who believes in him will be put to shame.” 12 For there is no distinction between Jew and Greek; the same Lord is Lord of all and is generous to all who call on him. 13 For, “Everyone who calls on the name of the Lord shall be saved.” 14 But how are they to call on one in whom they have not believed? And how are they to believe in one of whom they have never heard? And how are they to hear without someone to proclaim him? 15 And how are they to proclaim him unless they are sent? As it is written, “How beautiful are the feet of those who bring good news!”

This familiar story of Jesus walking on the water follows upon the death of John the Baptist (14:1-12), after which Jesus withdraws by boat to a “deserted place” that quickly is overrun by people seeking him out, who the disciples are challenged to feed (14:13-21). The episode clearly asserts Jesus’ authority even over nature and speaks of his divine identity: he says what God says (“I am he”) and does what God does. There is rich biblical background for this story, including Psalm 107:23-32. The story also raises questions about faith and fear.  Only Matthew tells the story of Peter’s attempt to imitate Jesus and the definitive reaction of the disciples, a confession Peter will not make for a couple chapters.

14:22 Jesus made the disciples get into the boat and go on ahead to the other side, while he dismissed the crowds. 23 And after he had dismissed the crowds, he went up the mountain by himself to pray. When evening came, he was there alone, 24 but by this time the boat, battered by the waves, was far from the land, for the wind was against them. 25 And early in the morning he came walking toward them on the sea. 26 But when the disciples saw him walking on the sea, they were terrified, saying, “It is a ghost!” And they cried out in fear. 27 But immediately Jesus spoke to them and said, “Take heart, it is I; do not be afraid.” 28 Peter answered him, “Lord, if it is you, command me to come to you on the water.” 29 He said, “Come.” So Peter got out of the boat, started walking on the water, and came toward Jesus. 30 But when he noticed the strong wind, he became frightened, and beginning to sink, he cried out, “Lord, save me!” 31 Jesus immediately reached out his hand and caught him, saying to him, “You of little faith, why did you doubt?” 32 When they got into the boat, the wind ceased. 33 And those in the boat worshiped him, saying, “Truly you are the Son of God.”

The Scripture quotations (except for the Psalm) are from the New Revised Standard Version Bible, copyright © 1989 by the Division of Christian Education of the National Council of Churches of Christ in the U.S.A.  All rights reserved.  The Collect of the Day and the Psalm are from The Book of Common Prayer.   Commentaries are copyright © 2020 Epiphany ESources, 67 E. Main St., Hornell, NY 14843. www.EpiphanyEsources.com. All rights reserved. Permission is given to copy for group study with this attribution.

Posted by The Rev Michael W Hopkins at 11:56 AM