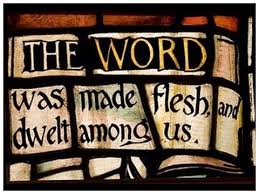 Today we read the poetic opening of the Gospel of John in which he proclaims that this Jesus born to a human mother was also the Word (in Greek, logos) made flesh from before the beginning of creation.

The Collect of the Day
Almighty God, you have poured upon us the new light of your incarnate Word: Grant that this light, enkindled in our hearts, may shine forth in our lives; through Jesus Christ our Lord, who lives and reigns with you, in the unity of the Holy Spirit, one God, now and for ever.  Amen.

1st Reading:  Isaiah 61:10—62:3[4]
In the beginning of our first reading, Zion herself speaks, proclaiming the newness that is a gift from God.  This newness will be a witness to all the nations. The prophet then speaks (“For Zion’s sake I will not keep silent…”).  He will proclaim to the world what God has done for Zion, and tell of her new names: Hephzibah (Delight) and Beulah (Married) [in 62:4, which is added as an optional extension].

61:10 I will greatly rejoice in the Lord, my whole being shall exult in my God; for he has clothed me with the garments of salvation, he has covered me with the robe of righteousness, as a bridegroom decks himself with a garland, and as a bride adorns herself with her jewels. 11 For as the earth brings forth its shoots, and as a garden causes what is sown in it to spring up, so the Lord God will cause righteousness and praise to spring up before all the nations. 62:1 For Zion’s sake I will not keep silent, and for Jerusalem’s sake I will not rest, until her vindication shines out like the dawn, and her salvation like a burning torch. 2 The nations shall see your vindication, and all the kings your glory; and you shall be called by a new name that the mouth of the Lord will give. 3 You shall be a crown of beauty in the hand of the Lord, and a royal diadem in the hand of your God.  4 [You shall no more be termed Forsaken, and your land shall no more be termed Desolate; but you shall be called My Delight is in Her, and your land Married; for the Lord delights in you, and your land shall be married.]

Psalm 147:13-21
Psalm 147 praises the God who reigns over creation and provides for it.  The use of the word “Zion” reflects the first reading.  The origins of the word “Zion” are murky.  It may have originally referred to a fortress.  In 2 Samuel 5:6-10), “Jerusalem,” “Zion,” and “the City of David” are used interchangeably.  “Zion” is most often used as a personification of Jerusalem.

13   Worship the Lord, O Jerusalem; *
praise your God, O Zion;
14   For he has strengthened the bars of your gates; *
he has blessed your children within you.
15   He has established peace on your borders; *
he satisfies you with the finest wheat.
16   He sends out his command to the earth, *
and his word runs very swiftly.
17   He gives snow like wool; *
he scatters hoarfrost like ashes.
18   He scatters his hail like bread crumbs; *
who can stand against his cold?
19   He sends forth his word and melts them; *
he blows with his wind, and the waters flow.
20   He declares his word to Jacob, *
his statutes and his judgments to Israel.
21   He has not done so to any other nation; *
to them he has not revealed his judgments.  Hallelujah!

2nd Reading:  Galatians 3:23-25; 4:4-7
The epistle reading today is Paul’s only direct mention of the birth of Jesus. It is in the context of his ongoing argument about the primacy of justification by faith. Probably the most important thing to note here is that God is the actor. For Paul, the Christmas story is a story about God making himself available to all people. Non-Jews are adopted children and, therefore, joint heirs with Christ.

3:23 Now before faith came, we were imprisoned and guarded under the law until faith would be revealed. 24 Therefore the law was our disciplinarian until Christ came, so that we might be justified by faith. 25 But now that faith has come, we are no longer subject to a disciplinarian. 4:4 But when the fullness of time had come, God sent his Son, born of a woman, born under the law, 5 in order to redeem those who were under the law, so that we might receive adoption as children. 6 And because you are children, God has sent the Spirit of his Son into our hearts, crying, “Abba! Father!” 7 So you are no longer a slave but a child, and if a child then also an heir, through God.

Gospel Reading:  John 1:1-18
Today we read the poetic opening of the Gospel of John in which he proclaims that this Jesus born to a human mother was also the Word (in Greek, logos) made flesh from before the beginning of creation.  John skillfully weaves together here language from the Greek notion of the primal “logos” with the Hebrew figure of Wisdom.  John carefully explains the testimonial place of John the Baptist in verses six through nine.  Jesus is both the Word of God and fully human.  He “lived among us” (literally, “pitched his tent among us”).

1:1 In the beginning was the Word, and the Word was with God, and the Word was God.  2 He was in the beginning with God. 3 All things came into being through him, and without him not one thing came into being. What has come into being 4 in him was life, and the life was the light of all people. 5 The light shines in the darkness, and the darkness did not overcome it. 6 There was a man sent from God, whose name was John. 7 He came as a witness to testify to the light, so that all might believe through him. 8 He himself was not the light, but he came to testify to the light. 9 The true light, which enlightens everyone, was coming into the world. 10 He was in the world, and the world came into being through him; yet the world did not know him. 11 He came to what was his own, and his own people did not accept him. 12 But to all who received him, who believed in his name, he gave power to become children of God, 13 who were born, not of blood or of the will of the ﬂesh or of the will of man, but of God. 14 And the Word became ﬂesh and lived among us, and we have seen his glory, the glory as of a father’s only son, full of grace and truth.  15 (John testified to him and cried out, “This was he of whom I said, ‘He who comes after me ranks ahead of me because he was before me.’”) 16 From his fullness we have all received, grace upon grace. 17 The law indeed was given through Moses; grace and truth came through Jesus Christ. 18 No one has ever seen God. It is God the only Son, who is close to the Father’s heart, who has made him known.

The Scripture quotations (except for the psalm) are from the New Revised Standard Version Bible, copyright © 1989 by the Division of Christian Education of the National Council of Churches of Christ in the U.S.A.  All rights reserved.  The Collect of the Day and the Psalm translation are from The Book of Common Prayer.  Commentaries are copyright © 2019, Epiphany ESources, 67 E. Main St., Hornell, NY 14843, www.epiphanyesources.com. All rights reserved.  Permission is given to copy for group study. Bulletin inserts are available. See our website for more information.

Posted by The Rev Michael W Hopkins at 10:20 AM