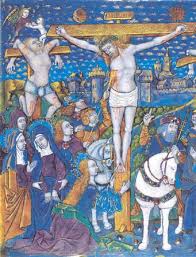 On this day when we celebrate Christ as “King of kings and Lord of lords,” we are reminded that it was the cross that was and is his throne.

1st Reading:  Jeremiah 23:1-6
Our passage today begins with an indictment of Israel’s kings (“shepherds”). The sheep have been scattered (into exile) because the shepherds have failed to lead and protect them. Then two promises follow. The first is that God will intervene to gather the sheep (end the exile) and raise up new shepherds. The second promise is that this new shepherd will be like David, whom God has never abandoned. Unlike the shepherds under whom Judah failed, this Davidic king will rule in righteousness. Christians experience this new rule in Jesus.

23:1 Woe to the shepherds who destroy and scatter the sheep of my pasture! says the Lord. 2 Therefore thus says the Lord, the God of Israel, concerning the shepherds who shepherd my people:  It is you who have scattered my flock, and have driven them away, and you have not attended to them. So I will attend to you for your evil doings, says the Lord. 3 Then I myself will gather the remnant of my flock out of all the lands where I have driven them, and I will bring them back to their fold, and they shall be fruitful and multiply. 4 I will raise up shepherds over them who will shepherd them, and they shall not fear any longer, or be dismayed, nor shall any be missing, says the Lord. 5 The days are surely coming, says the Lord, when I will raise up for David a righteous Branch, and he shall reign as king and deal wisely, and shall execute justice and righteousness in the land. 6 In his days Judah will be saved and Israel will live in safety. And this is the name by which he will be called: "The Lord is our righteousness."

Canticle: Song of Zechariah (Luke 1:68-79)
The psalm is replaced today by a canticle from The Book of Common Prayer (#16, p. 92).  Luke 1:68-79 is the song which Zechariah sings at the naming of his son John (the Baptist). The song articulates the tradition of Israel, the promises upon which the faith of Israel is founded. It then proclaims that these promises of old will find their fulfillment in the testimony of this child. In Luke’s Gospel, John is very much the symbol of the old covenant looking forward to the new.

Blessed be the Lord, the God of Israel; *
he has come to his people and set them free.
He has raised up for us a mighty savior, *
born of the house of his servant David.
Through his holy prophets he promised of old,
that he would save us from our enemies, *
from the hands of all who hate us.
He promised to show mercy to our fathers *
and to remember his holy covenant.
This was the oath he swore to our father Abraham, *
to set us free from the hands of our enemies,
Free to worship him without fear, *
holy and righteous in his sight
all the days of our life.
You, my child, shall be called the prophet of the Most High, *
for you will go before the Lord to prepare his way,
To give his people knowledge of salvation *
by the forgiveness of their sins.
In the tender compassion of our God *
the dawn from on high shall break upon us,
To shine on those who dwell in darkness and the
shadow of death, *
and to guide our feet into the way of peace.

Psalm 46
Psalm 46 is a song extolling God as king over Jerusalem, the bringer of peace and the source of the people’s strength.

2nd Reading:  Colossians 1:11-20
The Letter to the Colossians was written to counter “false teaching” (2:8-23) which seems to have been the insistence on a kind of “super piety.” Paul begins his letter, after the initial greeting (1:1-10), with a prayer for the community (vv. 11-14) in which he emphasizes the simplicity of the gospel and our response to it, centering on thanksgiving. He then quotes from what was most likely an early Christian hymn (vv. 15-20). The hymn has roots in the Hebrew Wisdom tradition (see Wisdom 7:22, 26 and Proverbs 8:22-30). It is a presentation of the “cosmic Christ,” whose death has reconciled all things to God.

1:11 May you be made strong with all the strength that comes from his glorious power, and may you be prepared to endure everything with patience, while joyfully 12 giving thanks to the Father, who has enabled you to share in the inheritance of the saints in the light. 13 He has rescued us from the power of darkness and transferred us into the kingdom of his beloved Son, 14 in whom we have redemption, the forgiveness of sins. 15 He is the image of the invisible God, the firstborn of all creation; 16 for in him all things in heaven and on earth were created, things visible and invisible, whether thrones or dominions or rulers or powers—all things have been created through him and for him. 17 He himself is before all things, and in him all things hold together. 18 He is the head of the body, the church; he is the beginning, the firstborn from the dead, so that he might come to have first place in everything. 19 For in him all the fullness of God was pleased to dwell, 20 and through him God was pleased to reconcile to himself all things, whether on earth or in heaven, by making peace through the blood of his cross.

Gospel Reading:  Luke 23:33-43
On this day when we celebrate Christ as “King of kings and Lord of lords,” we are reminded that it was the cross that was and is his throne. This is a very different king than humankind generally experiences or imagines. As Luke recounts Jesus’ death, he emphasizes the power he exercises from the cross—forgiveness, forgiveness for those who have betrayed and conspired against him, and forgiveness for the common thief who reaches out to him.  Traditionally, the “good thief’s” name was Didymus. Many prison chapels are dedicated to him.

23:33 When they came to the place that is called The Skull, they crucified Jesus there with the criminals, one on his right and one on his left. 34 Then Jesus said, “Father, forgive them; for they do not know what they are doing.” And they cast lots to divide his clothing. 35 And the people stood by, watching; but the leaders scoffed at him, saying, “He saved others; let him save himself if he is the Messiah of God, his chosen one!” 36 The soldiers also mocked him, coming up and offering him sour wine, 37 and saying, “If you are the King of the Jews, save yourself!” 38 There was also an inscription over him, “This is the King of the Jews.” 39 One of the criminals who were hanged there kept deriding him and saying, “Are you not the Messiah? Save yourself and us!” 40 But the other rebuked him, saying, “Do you not fear God, since you are under the same sentence of condemnation? 41 And we indeed have been condemned justly, for we are getting what we deserve for our deeds, but this man has done nothing wrong.” 42 Then he said, “Jesus, remember me when you come into your kingdom.” 43 He replied, “Truly I tell you, today you will be with me in Paradise.”

The Scripture quotations are from the New Revised Standard Version Bible, copyright © 1989 by the Division of Christian Education of the National Council of Churches of Christ in the U.S.A. The Psalm and the translation of the Canticle are from The Book of Common Prayer. Commentaries are copyright © 2019 Epiphany Esources, 67 E. Main St., Hornell, NY  14843, www.EpiphanyEsources.com. All rights reserved.  Permission is given to copy for group study.

Posted by The Rev Michael W Hopkins at 5:28 PM