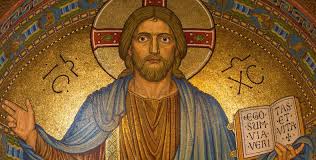 We close our liturgical year with Pilate’s encounter with Jesus in the Gospel of John.  Pilate questions Jesus as if he were a threat to the order of the Roman Empire.  Does this man claim to be a king?  Jesus never answers directly but talks about a kingdom not from this world.

1st Reading (Track 1):  2 Samuel 23:1-7
The last words of King David before his death (at 1 Kings 2:10) are in the form of a psalm praising God for his faithfulness to David’s house.  It is significant that David claims that God speaks directly to and through him.  Among his descendants this claim will gradually disappear.

23:1 Now these are the last words of David:  The oracle of David, son of Jesse, the oracle of the man whom God exalted, the anointed of the God of Jacob, the favorite of the Strong One of Israel:  2 The spirit of the Lord speaks through me, his word is upon my tongue. 3 The God of Israel has spoken, the Rock of Israel has said to me: One who rules over people justly, ruling in the fear of God, 4 is like the light of morning, like the sun rising on a cloudless morning, gleaming from the rain on the grassy land. 5 Is not my house like this with God? For he has made with me an everlasting covenant, ordered in all things and secure. Will he not cause to prosper all my help and my desire? 6 But the godless are all like thorns that are thrown away; for they cannot be picked up with the hand; 7 to touch them one uses an iron bar or the shaft of a spear. And they are entirely consumed in fire on the spot.

Psalm 132:1-13 [14-19] (Track 1)
Psalm 132 is a hymn celebrating God’s founding of the Davidic dynasty and the choice of Zion/Jerusalem as the center of Jewish life and government.  It may have been part of a liturgy, re-enacting the discovery of the ark of the covenant by David and the grand procession he made in bringing it to Jerusalem.

1     Lord, remember David, *
and all the hardships she endured;
2     How we swore an oath to the Lord *
and vowed a vow to the Mighty One of Jacob:
3     “I will not come under the roof of my house, *
nor climb up into my bed;
4     I will not allow my eyes to sleep, *
nor let my eyelids slumber;
5     Until I find a place for the Lord, *
a dwelling place for the Mighty One of Jacob.”
6     “The ark! We heard it was in Ephratah; *
we found it in the fields of Jearim.
7     Let us go to God’s dwelling place; *
let us fall upon our knees before his footstool.”
8     Arise, O Lord, into your resting-place, *
you and the ark of your strength.
9     Let your priests be clothed with righteousness; *
let your faithful people sing with joy.
10   For your servant David’s sake, *
do not turn away the face of your Anointed.
11   The Lord has sworn an oath to David; *
in truth, he will not break it:
12   “A son, the fruit of your body, *
will I set upon your throne.
13   If your children keep my covenant
and my testimonies that I shall teach them, *
their children will sit upon your throne for evermore.”
[14 For the Lord has chosen Zion; *
he has desired her for his habitation:
15   “This shall be my resting-place for ever; *
here will I dwell for I delight in her.
16   I will surely bless her provisions, *
and satisfy her poor with bread.
17   I will clothe her priests with salvation, *
and her faithful people will rejoice and sing.
18   There will I make the horn of David flourish; *
I have prepared a lamp for my Anointed.
19   As for his enemies, I will clothe them with shame; *
but as for him, his crown will shine.”]

1st Reading (Track 2):  Daniel 7:9-10, 13-14
The Book of Daniel was most likely written during the Maccabean revolt against the Greek ruler Antiochus Epiphanes IV (167-164 b.c.e.).  This was a time of enormous stress for the Jewish community, a time ripe for apocalyptic writing like Daniel.  Our passage this morning is a portion of one of the visions of Daniel.  The parts missing envision a great and terrible judgment on “the beast,” which is clearly symbolic of the Greek empire.  The portion we do read clearly foretells that God will ultimately reign in justice.  The identity of “one like a human being” has long been debated. Christians have tended to identify him as Jesus.

7:9 As I watched, thrones were set in place, and an Ancient One took his throne, his clothing was white as snow, and the hair of his head like pure wool; his throne was fiery flames, and its wheels were burning fire. 10 A stream of fire issued and flowed out from his presence. A thousand thousands served him, and ten thousand times ten thousand stood attending him. The court sat in judgment, and the books were opened. 13 As I watched in the night visions, I saw one like a human being coming with the clouds of heaven. And he came to the Ancient One and was presented before him. 14 To him was given dominion and glory and kingship, that all peoples, nations, and languages should serve him. His dominion is an everlasting dominion that shall not pass away, and his kingship is one that shall never be destroyed.

Psalm 93 (Track 2)
Psalm 93 begins a section of the psalter devoted to the kingly rule of God in Israel.  Recall that it was God’s intention from the beginning to be Israel’s King. It was the people who demanded an earthly king “like the other nations.” In this psalm God’s rule is based upon God’s control over the powers of chaos, symbolized by the sea.

1     The Lord is King;
he has put on splendid apparel; *
the Lord has put on his apparel
and girded himself with strength.
2     He has made the whole world so sure *
that it cannot be moved;
3     Ever since the world began, your throne has been established; *
you are from everlasting.
4     The waters have lifted up, O Lord,
the waters have lifted up their voice; *
the waters have lifted up their pounding waves.
5     Mightier than the sound of many waters,
mightier than the breakers of the sea, *
mightier is the Lord who dwells on high.
6     Your testimonies are very sure, *
and holiness adorns your house, O Lord,
for ever and for evermore.

2nd Reading:  Revelation to John 1:4b-8
As in all apocalyptic writing, the Revelation to John was written during a time of great stress—most likely one of the waves of persecution of the early Christians by the Romans (“Babylon” throughout the book is clearly symbolic of Rome).  Our passage this morning is from the introduction to the book and begins with a prayer.  Jesus is at the center of the prayer, accompanied by three powerful images. To name Jesus as “ruler of the kings of the earth” is to tell the end of the story at its beginning.  That is the significance of Jesus being “Alpha and Omega” (the first and last letters of the Greek alphabet).  Jesus is in time but stands out of time.  If it sounds like Revelation begins as a letter it is because that is its basic form.

1:4b Grace to you and peace from him who is and who was and who is to come, and from the seven spirits who are before his throne, 5 and from Jesus Christ, the faithful witness, the firstborn of the dead, and the ruler of the kings of the earth. To him who loves us and freed us from our sins by his blood, 6 and made us to be a kingdom, priests serving his God and Father, to him be glory and dominion forever and ever. Amen. 7 Look! He is coming with the clouds; every eye will see him, even those who pierced him; and on his account all the tribes of the earth will wail. So it is to be. Amen. 8 “I am the Alpha and the Omega,” says the Lord God, “who is and who was and who is to come, the Almighty.”

Gospel Reading:  John 18:33-37
We close our liturgical year with Pilate’s encounter with Jesus in the Gospel of John.  Pilate questions Jesus as if he were a threat to the order of the Roman Empire.  Does this man claim to be a king?  Jesus never answers directly but talks about a kingdom not from this world.  It is a kingdom unlike the kingdoms of this world in that Jesus’ followers do not fight for him.  Theirs is a non-violent movement.  Jesus’ kingdom is about truth, something about which Pilate can only be cynical, as in verse 38 he asks, “What is truth?”

18:33 Then Pilate entered the headquarters again, summoned Jesus, and asked him, “Are you the King of the Jews?” 34 Jesus answered, “Do you ask this on your own, or did others tell you about me?” 35 Pilate replied, “I am not a Jew, am I? Your own nation and the chief priests have handed you over to me. What have you done?” 36 Jesus answered, “My kingdom is not from this world. If my kingdom were from this world, my followers would be fighting to keep me from being handed over to the Jews. But as it is, my kingdom is not from here.” 37 Pilate asked him, “So you are a king?” Jesus answered, “You say that I am a king. For this I was born, and for this I came into the world, to testify to the truth. Everyone who belongs to the truth listens to my voice.”

The Scripture readings (except for the psalm) are from the New Revised Standard Version Bible, copyright © 1989 by the Division of Christian Education of the National Council of Churches of Christ in the U.S.A., and are used by permission.  All rights reserved.  The Psalm is from The Book of Common Prayer.  Commentaries are copyright © 2018 Epiphany ESources, 67 E. Main St., Hornell, NY 14843. www.EpiphanyEsources.com. All rights reserved. Permission is given to copy for group study with this attribution.  Bulletin inserts are available by subscription.  Go to our website for more information.

Posted by The Rev Michael W Hopkins at 10:34 AM