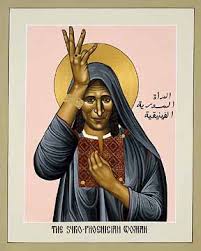 Our passage today contains two stories, one of which happens in “unclean” territory, i.e., inhabited by Gentiles.  The first story is unique in that Jesus appears to expand his view of his mission, and, by extension, that of the God of Israel.

The 16th Sunday after Pentecost (Proper 18B)

1st Reading (Track 1):  Proverbs 22:1-2, 8-9, 22-23
The Book of Proverbs is ascribed to King Solomon, but no doubt contains material from many ages up through the Exile.  It is a collection of wise sayings, witticisms, and poetic instructions on living well and justly.  Our passage today instructs on the maintenance of a good reputation, exercising the virtue of generosity and just behavior.  Verse 2 should not be taken to mean that God makes some people rich and others poor.  Rather, it extols all people, whatever their station in life, as children of God.

22:1 A good name is to be chosen rather than great riches, and favor is better than silver or gold. 2 The rich and the poor have this in common: the Lord is the maker of them all. 8 Whoever sows injustice will reap calamity, and the rod of anger will fail. 9 Those who are generous are blessed, for they share their bread with the poor. 22 Do not rob the poor because they are poor, or crush the afflicted at the gate; 23 for the Lord pleads their cause and despoils of life those who despoil them.

Psalm 125 (Track 1)
Psalm 125 is one of the “songs of ascent” (Psalms 120-134) which were most likely the songs of pilgrims to Jerusalem to celebrate one of the major festivals.  Psalm 125 begins as a song of confidence and trust and ends with a prayer that the wicked will receive their due.  “Peace be upon Israel” at the psalm’s end may once have been a refrain for these pilgrim songs.

1     Those who trust in the Lord are like Mount Zion, *
which cannot be moved, but stands fast for ever.
2     The hills stand about Jerusalem; *
so does the Lord stand round about his people,
from this time forth for evermore.
3     The scepter of the wicked shall not hold sway over the
land allotted to the just, *
so that the just shall not put their hands to evil.
4     Show your goodness, O Lord, to those who are good *
and to those who are true of heart.
5     As to those who turn aside to crooked ways,
the Lord will lead them away with the evildoers; *
but peace be upon Israel.
1st Reading (Track 2):  Isaiah 35:4-7a
Our first reading is a vision of a restored Jerusalem/Israel. The opening verses of the chapter (not included today) describe the transformation of the desert, which continues in verse 6.  The healing of the blind, deaf, lame, and mute pair this passage with today’s Gospel reading.

35:4 Say to those who are of a fearful heart, “Be strong, do not fear! Here is your God. He will come with vengeance, with terrible recompense. He will come and save you.” 5 Then the eyes of the blind shall be opened, and the ears of the deaf unstopped; 6 then the lame shall leap like a deer, and the tongue of the speechless sing for joy. For waters shall break forth in the wilderness, and streams in the desert; 7a the burning sand shall become a pool, and the thirsty ground springs of water.

Psalm 146 (Track 2)
The last five psalms are often referred to as the “Hallel” or “Hallelujah” psalms.  “Hallelujah” is a Hebrew word meaning “Praise the Lord.” (“Alleluia” is the latinized version of the word). They are hymns of praise.  Psalm 146 is a hymn of the trustworthiness of God, even for the stranger, the orphan, and the widow, among the most vulnerable in Israel’s patriarchal society.

1     Hallelujah!
Praise the Lord, O my soul! *
I will praise the Lord as long as I live;
I will sing praises to my God while I have my being.
2     Put not your trust in rulers, nor in any child of earth, *
for there is no help in them.
3     When they breathe their last, they return to the earth, *
and in that day their thoughts perish.
4     Happy are they who have the God of Jacob for their help! *
whose help is in the Lord their God;
5     Who made heaven and earth, the seas, and all that is in them; *
who keeps his promise for ever.
6     Who gives justice to those who are oppressed, *
and food to those who hunger.
7     The Lord sets the prisoners free;
the Lord opens the eyes of the blind; *
the Lord lifts up those who are bowed down;
8     The Lord loves the righteous;
the Lord cares for the stranger; *
he sustains the orphan and widow,
but frustrates the way of the wicked.
9     The Lord shall reign for ever, *
your God, O Zion, throughout all generations.
Hallelujah!

2nd Reading:  James 2:1-10 (11-13), 14-17
Two major themes of James are present in this passage:  The first is not to show favoritism, which violates the “royal law” of love of neighbor.  The second is that faith without action that flows from it, is worth nothing.

2:1 My brothers and sisters, do you with your acts of favoritism really believe in our glorious Lord Jesus Christ? 2 For if a person with gold rings and in fine clothes comes into your assembly, and if a poor person in dirty clothes also comes in, 3 and if you take notice of the one wearing the fine clothes and say, “Have a seat here, please,” while to the one who is poor you say, “Stand there,” or, “Sit at my feet,” 4 have you not made distinctions among yourselves, and become judges with evil thoughts? 5 Listen, my beloved brothers and sisters. Has not God chosen the poor in the world to be rich in faith and to be heirs of the kingdom that he has promised to those who love him? 6 But you have dishonored the poor. Is it not the rich who oppress you? Is it not they who drag you into court? 7 Is it not they who blaspheme the excellent name that was invoked over you? 8 You do well if you really fulfill the royal law according to the scripture, “You shall love your neighbor as yourself.” 9 But if you show partiality, you commit sin and are convicted by the law as transgressors. 10 For whoever keeps the whole law but fails in one point has become accountable for all of it.
[11 For the one who said, “You shall not commit adultery,” also said, “You shall not murder.” Now if you do not commit adultery but if you murder, you have become a transgressor of the law. 12 So speak and so act as those who are to be judged by the law of liberty. 13 For judgment will be without mercy to anyone who has shown no mercy; mercy triumphs over judgment.]
14 What good is it, my brothers and sisters, if you say you have faith but do not have works? Can faith save you? 15 If a brother or sister is naked and lacks daily food, 16 and one of you says to them, “Go in peace; keep warm and eat your fill,” and yet you do not supply their bodily needs, what is the good of that? 17 So faith by itself, if it has no works, is dead.

Gospel Reading:  Mark 7:24-37
Chapter seven of Mark, as a whole, contains several incidents in which Jesus re-defines right relationship with those labelled “unclean” under Jewish law.  Our passage today contains two stories, one of which happens in “unclean” territory, i.e., inhabited by Gentiles.  The first story is unique in that Jesus appears to expand his view of his mission, and, by extension, that of the God of Israel.  The exchange is shocking, but the woman becomes an example of persistent faith.  In the second story Jesus heals a deaf-mute, and the Aramaic word he uses is preserved, which literally means, “be released.”  Jesus’ desire to operate “under the radar” is becoming increasingly impossible as his acts of healing become known.

7:24 Jesus set out and went away to the region of Tyre. He entered a house and did not want anyone to know he was there. Yet he could not escape notice, 25 but a woman whose little daughter had an unclean spirit immediately heard about him, and she came and bowed down at his feet. 26 Now the woman was a Gentile, of Syrophoenician origin. She begged him to cast the demon out of her daughter. 27 He said to her, “Let the children be fed first, for it is not fair to take the children’s food and throw it to the dogs.” 28 But she answered him, “Sir, even the dogs under the table eat the children's crumbs.” 29 Then he said to her, “For saying that, you may go—the demon has left your daughter.” 30 So she went home, found the child lying on the bed, and the demon gone. 31 Then he returned from the region of Tyre, and went by way of Sidon towards the Sea of Galilee, in the region of the Decapolis. 32 They brought to him a deaf man who had an impediment in his speech; and they begged him to lay his hand on him. 33 He took him aside in private, away from the crowd, and put his fingers into his ears, and he spat and touched his tongue. 34 Then looking up to heaven, he sighed and said to him, “Ephphatha,” that is, “Be opened.” 35 And immediately his ears were opened, his tongue was released, and he spoke plainly. 36 Then Jesus ordered them to tell no one; but the more he ordered them, the more zealously they proclaimed it. 37 They were astounded beyond measure, saying, “He has done everything well; he even makes the deaf to hear and the mute to speak.”

The Scripture readings (except for the psalm) are from the New Revised Standard Version Bible, copyright © 1989 by the Division of Christian Education of the National Council of Churches of Christ in the U.S.A., and are used by permission.  All rights reserved.  The Collect of the Day and the Psalm translation are from The Book of Common Prayer.  Commentaries are copyright © 2018 Epiphany ESources, 67 E. Main St., Hornell, NY 14843. www.EpiphanyEsources.com. All rights reserved. Permission is given to copy for group study.  For lectionary bulletin inserts using these readings and commentaries, go to our website.

Posted by The Rev Michael W Hopkins at 4:32 PM