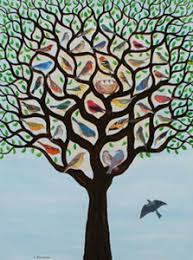 With what can we compare the kingdom of God, or what parable will we use for it? 31 It is like a mustard seed, which, when sown upon the ground, is the smallest of all the seeds on earth...

1st Reading (Track 1): 1 Samuel 15:34—16:13
In last week’s reading Saul was chosen as king.  He is a disappointment to God, largely through his disobedience (see 15:4-9). Samuel must deliver God’s verdict, which he does regretfully. He has become attached to Saul.  But God orders Samuel to find the new chosen one.  Note the text makes much about not looking at the outward forms of Jesse’s sons, but then cannot help but brag about David’s handsomeness!  David will not become king until the beginning of 2 Samuel.  Until then Saul and he develop a relationship that is fraught with peril for both.

15:34 Samuel went to Ramah; and Saul went up to his house in Gibeah of Saul. 35 Samuel did not see Saul again until the day of his death, but Samuel grieved over Saul. And the Lord was sorry that he had made Saul king over Israel. 16:1 The Lord said to Samuel, “How long will you grieve over Saul? I have rejected him from being king over Israel. Fill your horn with oil and set out; I will send you to Jesse the Bethlehemite, for I have provided for myself a king among his sons.” 2 Samuel said, “How can I go? If Saul hears of it, he will kill me.” And the Lord said, “Take a heifer with you, and say, ‘I have come to sacrifice to the Lord.’ 3 Invite Jesse to the sacrifice, and I will show you what you shall do; and you shall anoint for me the one whom I name to you.” 4 Samuel did what the Lord commanded, and came to Bethlehem. The elders of the city came to meet him trembling, and said, “Do you come peaceably?” 5 He said, “Peaceably; I have come to sacrifice to the Lord; sanctify yourselves and come with me to the sacrifice.” And he sanctified Jesse and his sons and invited them to the sacrifice. 6 When they came, he looked on Eliab and thought, “Surely the Lord’s anointed is now before the Lord.” 7 But the Lord said to Samuel, “Do not look on his appearance or on the height of his stature, because I have rejected him; for the Lord does not see as mortals see; they look on the outward appearance, but the Lord looks on the heart.” 8 Then Jesse called Abinadab, and made him pass before Samuel. He said, “Neither has the LORD chosen this one.” 9 Then Jesse made Shammah pass by. And he said, “Neither has the Lord chosen this one.” 10 Jesse made seven of his sons pass before Samuel, and Samuel said to Jesse, “The Lord has not chosen any of these.” 11 Samuel said to Jesse, “Are all your sons here?” And he said, “There remains yet the youngest, but he is keeping the sheep.” And Samuel said to Jesse, “Send and bring him; for we will not sit down until he comes here.” 12 He sent and brought him in. Now he was ruddy, and had beautiful eyes, and was handsome. The Lord said, “Rise and anoint him; for this is the one.” 13 Then Samuel took the horn of oil, and anointed him in the presence of his brothers; and the spirit of the Lord came mightily upon David from that day forward. Samuel then set out and went to Ramah.

Psalm 20 (Track 1)
Psalm 20 was probably used as part of a royal liturgy.  It proclaims that God will respond to the king’s prayer and give him victory.  He will do so because of the king’s (and the people’s) trust in God.

1   May the Lord answer you in the day of trouble, *
the Name of the God of Jacob defend you;
2   Send you help from his holy place *
and strengthen you out of Zion;
3   Remember all your offerings *
and accept your burnt sacrifice;
4   Grant you your heart’s desire *
and prosper all your plans.
5   We will shout for joy at your victory
and triumph in the Name of our God; *
may the Lord grant all your requests.
6   Now I know that the Lord gives victory to his anointed; *
he will answer him out of his holy heaven,
with the victorious strength of his right hand.
7   Some put their trust in chariots and some in horses, *
but we will call upon the Name of the Lord our God.
8   They collapse and fall down, *
but we will arise and stand upright.
9   O Lord, give victory to the king *
and answer us when we call.

1st Reading (Track 2): Ezekiel 17:22-24
The prophet Ezekiel was a prophet of the exile, that period when the Jewish people had been completely overrun by the Babylonian Empire and many of them forced into exile in Babylon.  In our reading this morning Ezekiel foresees a return to the homeland using the image of a sprig that grows into a great tree on a “high and lofty mountain.”  The dry tree shall flourish—a word of hope for the exiles.

17:22 Thus says the Lord God:  I myself will take a sprig from the lofty top of a cedar; I will set it out.  I will break off a tender one from the topmost of its young twigs; I myself will plant it on a high and lofty mountain.  23 On the mountain height of Israel I will plant it, in order that it may produce boughs and bear fruit, and become a noble cedar. Under it every kind of bird will live; in the shade of its branches will nest winged creatures of every kind. 24 All the trees of the field shall know that I am the Lord.  I bring low the high tree, I make high the low tree; I dry up the green tree and make the dry tree flourish.  I the LORD have spoken; I will accomplish it.

Psalm 92:1-4, 11-14 (Track 2)
Psalm 92 is a song of thanksgiving for the deliverance from personal enemies.  In the Hebrew text it is entitled “A Song for the Sabbath Day.”  Christian emphasis on “thanksgiving” (the meaning of the word “Eucharist”) as the principal cause for weekly corporate worship has its root in the Hebrew Scriptures.

1   It is a good thing to give thanks to the Lord, *
and to sing praises to your Name, O Most High;
2   To tell of your loving-kindness early in the morning *
and of your faithfulness in the night season;
3   On the psaltery, and on the lyre, *
and to the melody of the harp.
4   For you have made me glad by your acts, O Lord; *
and I shout for joy because of the works of your hands.
11 The righteous shall flourish like a palm tree, *
and shall spread abroad like a cedar of Lebanon.
12 Those who are planted in the house of the Lord *
shall flourish in the courts of our God;.
13 They shall still bear fruit in old age; *
they shall be green and succulent;
14 That they may show how upright the Lord is, *
my Rock, in whom there is no fault.

2nd Reading:  2 Corinthians 5:6-10 (11-13) 14-17
Paul wants the Corinthians to be confident as they face death. The gift of the Spirit to each one of us is a guarantee (the Baptismal rite calls it a “seal”) that God will never abandon us.  If we can let go of our fears about the future, then we can concentrate on our ministry of reconciliation in the present.  In fact, it makes that ministry of reconciliation all the more urgent and clear.  Everything has become new? This is our proclamation.  By this Paul does not mean that we should pretend everything is new, but believe that it is new despite all signs to the contrary.

5:6 We are always confident; even though we know that while we are at home in the body we are away from the Lord—7 for we walk by faith, not by sight. 8 Yes, we do have confidence, and we would rather be away from the body and at home with the Lord. 9 So whether we are at home or away, we make it our aim to please him. 10 For all of us must appear before the judgment seat of Christ, so that each may receive recompense for what has been done in the body, whether good or evil.
[11  Therefore, knowing the fear of the Lord, we try to persuade others; but we ourselves are well known to God, and I hope that we are also well known to your consciences. 12 We are not commending ourselves to you again, but giving you an opportunity to boast about us, so that you may be able to answer those who boast in outward appearance and not in the heart. 13 For if we are beside ourselves, it is for God; if we are in our right mind, it is for you.]
14  For the love of Christ urges us on, because we are convinced that one has died for all; therefore all have died. 15 And he died for all, so that those who live might live no longer for themselves, but for him who died and was raised for them. 16 From now on, therefore, we regard no one from a human point of view; even though we once knew Christ from a human point of view, we know him no longer in that way. 17 So if anyone is in Christ, there is a new creation: everything old has passed away; see, everything has become new!

Gospel Reading:  Mark 4:26-34
Chapter four of Mark is the chapter of parables.  Mark contains far fewer parables than Matthew and Luke, and they are mostly found here.  The chapter opens with the well-known Parable of the Sower (we read it in Matthew’s year).  Here we have two short parables:  the seed growing secretly and the mustard seed.  (The former is found also in Matthew, the latter in both Matthew and Luke).  They both emphasize the mysteriousness of God’s kingdom/God’s grace.

4:26 Jesus said, “The kingdom of God is as if someone would scatter seed on the ground, 27 and would sleep and rise night and day, and the seed would sprout and grow, he does not know how. 28 The earth produces of itself, first the stalk, then the head, then the full grain in the head. 29 But when the grain is ripe, at once he goes in with his sickle, because the harvest has come.” 30 He also said, “With what can we compare the kingdom of God, or what parable will we use for it? 31 It is like a mustard seed, which, when sown upon the ground, is the smallest of all the seeds on earth; 32 yet when it is sown it grows up and becomes the greatest of all shrubs, and puts forth large branches, so that the birds of the air can make nests in its shade.” 33 With many such parables he spoke the word to them, as they were able to hear it; 34 he did not speak to them except in parables, but he explained everything in private to his disciples.

Posted by The Rev Michael W Hopkins at 5:38 PM