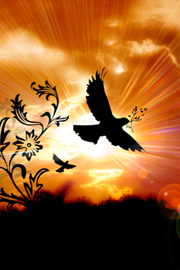 1st Reading (Track 1):  1 Samuel 3:1-10 (11-20)
Our first reading is the call of the prophet Samuel while he was a boy serving under the priest Eli.  Samuel’s mother Hannah had dedicated him to the Lord’s service after his miraculous birth. His first prophetic act is to deliver a harsh message to his mentor, signaling the end of his priestly line.  God is about to do a new thing in raising up a king to rule over Israel.  Samuel will become God’s “kingmaker.”  Question: How do you recognize the voice of God?

3:1 Now the boy Samuel was ministering to the Lord under Eli. The word of the Lord was rare in those days; visions were not widespread. 2 At that time Eli, whose eyesight had begun to grow dim so that he could not see, was lying down in his room; 3 the lamp of God had not yet gone out, and Samuel was lying down in the temple of the Lord, where the ark of God was. 4 Then the Lord called, “Samuel! Samuel!” and he said, “Here I am!” 5 and ran to Eli, and said, “Here I am, for you called me.” But he said, “I did not call; lie down again.” So he went and lay down. 6 The Lord called again, “Samuel!” Samuel got up and went to Eli, and said, “Here I am, for you called me.” But he said, “I did not call, my son; lie down again.” 7 Now Samuel did not yet know the Lord, and the word of the Lord had not yet been revealed to him. 8 The Lord called Samuel again, a third time. And he got up and went to Eli, and said, “Here I am, for you called me.” Then Eli perceived that the Lord was calling the boy. 9 Therefore Eli said to Samuel, ‘Go, lie down; and if he calls you, you shall say, ‘Speak, Lord, for your servant is listening.’” So Samuel went and lay down in his place. 10 Now the LORD came and stood there, calling as before, “Samuel! Samuel!” And Samuel said, “Speak, for your servant is listening.”
[11 Then the Lord said to Samuel, “See, I am about to do something in Israel that will make both ears of anyone who hears of it tingle. 12 On that day I will fulfill against Eli all that I have spoken concerning his house, from beginning to end. 13 For I have told him that I am about to punish his house forever, for the iniquity that he knew, because his sons were blaspheming God, and he did not restrain them. 14 Therefore I swear to the house of Eli that the iniquity of Eli’s house shall not be expiated by sacrifice or offering forever.” 15 Samuel lay there until morning; then he opened the doors of the house of the Lord. Samuel was afraid to tell the vision to Eli. 16 But Eli called Samuel and said, “Samuel, my son.” He said, “Here I am.” 17 Eli said, “What was it that he told you? Do not hide it from me. May God do so to you and more also, if you hide anything from me of all that he told you.” 18 So Samuel told him everything and hid nothing from him. Then he said, “It is the Lord; let him do what seems good to him.” 19 As Samuel grew up, the Lord was with him and let none of his words fall to the ground. 20 And all Israel from Dan to Beer-sheba knew that Samuel was a trustworthy prophet of the Lord.]

Psalm 139:1-5, 12-17 (Track 1)
Psalm 139 tells of the God who is not only Lord of creation, but also present to every human being, knowing our innermost thoughts.  We have been created with the greatest of care.  Question: Can you think of a time when God searched you out and knew you?  If not, can you ask God to reveal himself deep within you?

1   Lord, you have searched me out and known me; *
you know my sitting down and my rising up;
you discern my thoughts from afar.
2   You trace my journeys and my resting-places *
and are acquainted with all my ways.
3   Indeed, there is not a word on my lips, *
but you, O Lord, know it altogether.
4   You press upon me behind and before *
and lay your hand upon me.
5   Such knowledge is too wonderful for me; *
it is so high that I cannot attain to it.
12 For you yourself created my inmost parts; *
you knit me together in my mother’s womb.
13 I will thank you because I am marvelously made; *
your works are wonderful, and I know it well.
14 My body was not hidden from you, *
while I was being made in secret
and woven in the depths of the earth.
15 Your eyes beheld my limbs, yet unfinished in the womb;
all of them were written in your book; *
they were fashioned day by day,
when as yet there was none of them.
16 How deep I find your thoughts, O God! *
how great is the sum of them!
17 If I were to count them, they would be more in number
than the sand; *
to count them all, my life span would need to
be like yours.

1st Reading (Track 2):  Deuteronomy 5:12-15
This passage is taken out of the listing of the Ten Commandments in Deuteronomy 5, a listing in which the sabbath commandment receives a great deal of attention (see Exodus 20:1-17 for the “original” list).  The sabbath commandment is often called the hinge between those commandment about relationship with God (1-3) and those about relationship in human community (5-10).  The sabbath is a gift of rest.  In the Exodus version, this gift follows upon God’s rest on the seventh day of creation.  Here the rest has to do with an exercise in freedom—freedom not granted under slavery in Egypt.  Why should we and how can we follow the sabbath command today?

Psalm 81:1-10 (Track 2)
Psalm 81 begins with a call to worship (1-6a), followed by an oracle from God regarding the deliverance of the people from slavery in Egypt, similar to the reason given to observe the sabbath in out first reading.

1   Sing with joy to God our strength *
and raise a loud shout to the God of Jacob.
2   Raise a song and sound the timbrel, *
the merry harp, and the lyre.
3   Blow the ram’s-horn at the new moon, *
and at the full moon, the day of our feast.
4   For this is a statute for Israel, *
a law of the God of Jacob.
5   He laid it as a solemn charge upon Joseph; *
when he came out of the land of Egypt.
6   I heard an unfamiliar voice saying, *
“I eased his shoulder from the burden;
His hands were set free from bearing the load.”
7   You called on me in trouble, and I saved you; *
I answered you from the secret place of thunder
And tested you at the waters of Meribah.
8   Hear, O my people, and I will admonish you: *
O Israel, if you would but listen to me!
9   There shall be no strange god among you; *
you shall not worship a foreign god.
10 I am the Lord your God,
Who brought you out of the land of Egypt and said, *
“Open your mouth wide, and I will fill it.”

2nd Reading:  2 Corinthians 4:5-12
Paul has been defending his ministry, which apparently has come under question among some of the Corinthians.  In our passage today, he speaks of what makes Christian ministry authentic and authoritative. This is as true for our own ministries today as it was for Paul.  It begins, always, as the ministry of Jesus, coming from deep within. Humbleness is also essential.  The paradox of confidence and humility is just one of the tensions we must hold together in ministry.  The last sentence means something like, “I must give up myself to serve you so that you may have life.”

4:5 We do not proclaim ourselves; we proclaim Jesus Christ as Lord and ourselves as your slaves for Jesus’ sake. 6 For it is the God who said, “Let light shine out of darkness,” who has shone in our hearts to give the light of the knowledge of the glory of God in the face of Jesus Christ. 7 But we have this treasure in clay jars, so that it may be made clear that this extraordinary power belongs to God and does not come from us. 8 We are afflicted in every way, but not crushed; perplexed, but not driven to despair; 9 persecuted, but not forsaken; struck down, but not destroyed; 10 always carrying in the body the death of Jesus, so that the life of Jesus may also be made visible in our bodies. 11 For while we live, we are always being given up to death for Jesus’ sake, so that the life of Jesus may be made visible in our mortal flesh. 12 So death is at work in us, but life in you.

Gospel Reading:  Mark 2:23—3:6
Our Gospel is two scenes, both regarding the sabbath laws that had developed in Israel, which had become more and more difficult to follow.  Jesus desires for common sense to prevail, and a fundamental change of perspective.  The command of sabbath is meant for the good of humankind, not for its enslavement.  It does not take long in Mark’s Gospel for both religious and political authorities to begin to seek a way to be rid of Jesus and his meddlesome teaching.

2:23 One sabbath he was going through the grainfields; and as they made their way his disciples began to pluck heads of grain. 24 The Pharisees said to him, “Look, why are they doing what is not lawful on the sabbath?” 25 And he said to them, “Have you never read what David did when he and his companions were hungry and in need of food? 26 He entered the house of God, when Abiathar was high priest, and ate the bread of the Presence, which it is not lawful for any but the priests to eat, and he gave some to his companions.” 27 Then he said to them, “The sabbath was made for humankind, and not humankind for the sabbath; 28 so the Son of Man is lord even of the sabbath.” 3:1 Again he entered the synagogue, and a man was there who had a withered hand. 2 They watched him to see whether he would cure him on the sabbath, so that they might accuse him. 3 And he said to the man who had the withered hand, “Come forward.” 4 Then he said to them, “Is it lawful to do good or to do harm on the sabbath, to save life or to kill?” But they were silent. 5 He looked around at them with anger; he was grieved at their hardness of heart and said to the man, “Stretch out your hand.” He stretched it out, and his hand was restored. 6 The Pharisees went out and immediately conspired with the Herodians against him, how to destroy him.

The Scripture readings (except for the psalm) are from the New Revised Standard Version Bible, copyright © 1989 by the Division of Christian Education of the National Council of Churches of Christ in the U.S.A., and are used by permission.  All rights reserved.  The Psalm translation is from The Book of Common Prayer.  Commentaries are copyright © 2017 Epiphany ESources, 67 E. Main St., Hornell, NY 14843. www.EpiphanyEsources.com. All rights reserved. Permission is given to copy for congregational use or group study with this attribution.

Posted by The Rev Michael W Hopkins at 11:39 AM