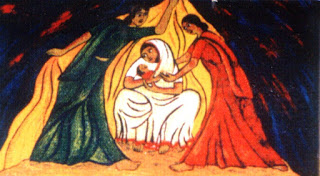 1st Reading (Track 1):
Exodus 1:8—2:10
Exodus 1:8 is a significant shift in the text. The memory of good relationship with the children of Israel in Egypt is gone, and a new Pharaoh determines to enslave them. The term “Hebrews” seems to have arisen in Egypt as a way of naming the outsiders, literally “those who crossed over,” i.e., came from another place. The midwives Shiprah and Puah can be celebrated as responsible for the survival of these Hebrews.  Their story of cunning disobedience will be repeated many times over in the Scriptures.  The name “Moses” is clearly of Egyptian origin (“to beget a child”), but is given a Hebrew etymology of “he who draws out.”

1:8 Now a new king arose over Egypt, who did not know Joseph. 9 He said to his people, “Look, the Israelite people are more numerous and more powerful than we. 10 Come, let us deal shrewdly with them, or they will increase and, in the event of war, join our enemies and fight against us and escape from the land.” 11 Therefore they set taskmasters over them to oppress them with forced labor. They built supply cities, Pithom and Rameses, for Pharaoh. 12 But the more they were oppressed, the more they multiplied and spread, so that the Egyptians came to dread the Israelites. 13 The Egyptians became ruthless in imposing tasks on the Israelites, 14 and made their lives bitter with hard service in mortar and brick and in every kind of field labor. They were ruthless in all the tasks that they imposed on them. 15 The king of Egypt said to the Hebrew midwives, one of whom was named Shiphrah and the other Puah, 16 “When you act as midwives to the Hebrew women, and see them on the birthstool, if it is a boy, kill him; but if it is a girl, she shall live.” 17 But the midwives feared God; they did not do as the king of Egypt commanded them, but they let the boys live. 18 So the king of Egypt summoned the midwives and said to them, “Why have you done this, and allowed the boys to live?” 19 The midwives said to Pharaoh, “Because the Hebrew women are not like the Egyptian women; for they are vigorous and give birth before the midwife comes to them.” 20 So God dealt well with the midwives; and the people multiplied and became very strong. 21 And because the midwives feared God, he gave them families. 22 Then Pharaoh commanded all his people, “Every boy that is born to the Hebrews you shall throw into the Nile, but you shall let every girl live.” 2:1 Now a man from the house of Levi went and married a Levite woman. 2 The woman conceived and bore a son; and when she saw that he was a fine baby, she hid him three months. 3 When she could hide him no longer she got a papyrus basket for him, and plastered it with bitumen and pitch; she put the child in it and placed it among the reeds on the bank of the river. 4 His sister stood at a distance, to see what would happen to him. 5 The daughter of Pharaoh came down to bathe at the river, while her attendants walked beside the river. She saw the basket among the reeds and sent her maid to bring it. 6 When she opened it, she saw the child. He was crying, and she took pity on him. “This must be one of the Hebrews’ children,” she said. 7 Then his sister said to Pharaoh’s daughter, “Shall I go and get you a nurse from the Hebrew women to nurse the child for you?” 8 Pharaoh’s daughter said to her, “Yes.” So the girl went and called the child’s mother. 9 Pharaoh’s daughter said to her, “Take this child and nurse it for me, and I will give you your wages.” So the woman took the child and nursed it. 10 When the child grew up, she brought him to Pharaoh’s daughter, and she took him as her son. She named him Moses, “because,” she said, “I drew him out of the water.”

Psalm 124 (Track 1)
Psalm 124 is one of the “Songs of Ascents” (Psalms 120-134), pilgrim songs sung on the way to celebrate festivals in Jerusalem. This psalm begins with a wonderment: “What if…”, referring to the escape from Egypt.  Verses 6-8 resolves this “if” into a “blessing.” God is the God who saves.

1st Reading (Track 2):  Isaiah 51:1-6
“Listen” is the imperative of this passage: Listen and look to the stories of your ancestors (vv. 1-2). As a plea to those who have lived in exile, listen and look for a new creation (v. 3).  Listen for a teaching and a justice that turns the governance of empire on its head, for the rule of the Lord, which results in deliverance and salvation rather than exploitation and fear.

51:1 Listen to me, you that pursue righteousness, you that seek the Lord. Look to the rock from which you were hewn, and to the quarry from which you were dug. 2 Look to Abraham your father and to Sarah who bore you; for he was but one when I called him, but I blessed him and made him many. 3 For the Lord will comfort Zion; he will comfort all her waste places, and will make her wilderness like Eden, her desert like the garden of the Lord; joy and gladness will be found in her, thanksgiving and the voice of song. 4 Listen to me, my people, and give heed to me, my nation; for a teaching will go out from me, and my justice for a light to the peoples. 5 I will bring near my deliverance swiftly, my salvation has gone out and my arms will rule the peoples; the coastlands wait for me, and for my arm they hope. 6 Lift up your eyes to the heavens, and look at the earth beneath; for the heavens will vanish like smoke, the earth will wear out like a garment, and those who live on it will die like gnats; but my salvation will be forever, and my deliverance will never be ended.

Psalm 138 (Track 2)
Psalm 138 is a song of thanksgiving by one who has been in crisis, but now that the crisis has been averted, a vow to praise in the temple is being fulfilled. Israel’s thanksgiving is for the Lord who rules over all (so-called) gods and kings and the nations they serve.

1   I will give thanks to you, O Lord, with my whole heart; *
before the gods I will sing your praise.
2   I will bow down toward your holy temple
and praise your Name, *
because of your love and faithfulness;
3   For you have glorified your Name *
and your word above all things
4   When I called, you answered me; *
you increased my strength within me.
5   All the kings of the earth will praise you, O Lord, *
when they have heard the words of your mouth.
6   They will sing of the ways of the Lord, *
that great is the glory of the Lord.
7   Though the Lord be high, he cares for the lowly; *
He perceives the haughty from afar.
8   Though I walk in the midst of trouble, you keep me safe; *
you stretch forth your hand against the fury of my enemies;
your right hand shall save me.
9   The Lord will make good his purpose for me; *
O Lord, your love endures for ever;
Do not abandon the works of your hands.

2nd Reading:  Romans 12:1-8
Chapter 12 begins a new section in Paul’s letter to the Christians in Rome. Having said all that he has said before, this is what living in covenant with this God from whom nothing can separate us (8:39) looks like.  The appeal includes the necessity of discernment, humility, giftedness as part of a body, and the exercising of those gifts for the body’s good. In addition, Paul sees both grace and faith not as some easily defined, static things, but fine-tuned in each individual and tied to the gifts given us for the good of the whole.

12:1 I appeal to you therefore, brothers and sisters, by the mercies of God, to present your bodies as a living sacrifice, holy and acceptable to God, which is your spiritual worship. 2 Do not be conformed to this world, but be transformed by the renewing of your minds, so that you may discern what is the will of God—what is good and acceptable and perfect. 3 For by the grace given to me I say to everyone among you not to think of yourself more highly than you ought to think, but to think with sober judgment, each according to the measure of faith that God has assigned. 4 For as in one body we have many members, and not all the members have the same function, 5 so we, who are many, are one body in Christ, and individually we are members one of another. 6 We have gifts that differ according to the grace given to us: prophecy, in proportion to faith; 7 ministry, in ministering; the teacher, in teaching; 8 the exhorter, in exhortation; the giver, in generosity; the leader, in diligence; the compassionate, in cheerfulness.

Gospel Reading:  Matthew 16:13-20
Our Gospel reading is the well-known story of Peter’s confession that Jesus is the Messiah, as someone beyond the prophetic person that the disciples say others see him. The name “Peter” (Greek “petros”) and the word rock (Greek “petra”) are related in a play on words that we miss in English. Keys were a symbol of authority (for example, Isaiah 22:22, “the key of the House of David). This text is very much behind both the tradition that Peter was the first Bishop of Rome (or “Pope”) and the power that the church has to “bind or loose.” In Greek these are judicial terms which mean “forbid or allow,” probably referring primarily to Peter’s (and the church’s) teaching authority. Matthew is the only Gospel writer who uses the word “church” (Greek “ecclesia,” “assembly”). This is the first time of four. It shows that in Matthew’s experience, a distinctive community has formed. In its use throughout the New Testament, it never refers to a building or an institutional structure, but to a people gathered for a particular purpose.

16:13 Now when Jesus came into the district of Caesarea Philippi, he asked his disciples, “Who do people say that the Son of Man is?” 14 And they said, “Some say John the Baptist, but others Elijah, and still others Jeremiah or one of the prophets.” 15 He said to them, “But who do you say that I am?” 16 Simon Peter answered, “You are the Messiah, the Son of the living God.” 17 And Jesus answered him, “Blessed are you, Simon son of Jonah! For flesh and blood has not revealed this to you, but my Father in heaven. 18 And I tell you, you are Peter, and on this rock I will build my church, and the gates of Hades will not prevail against it. 19 I will give you the keys of the kingdom of heaven, and whatever you bind on earth will be bound in heaven, and whatever you loose on earth will be loosed in heaven.” 20 Then he sternly ordered the disciples not to tell anyone that he was the Messiah.

The Scripture quotations (except for the psalm) are from the New Revised Standard Version Bible, copyright © 1989 by the Division of Christian Education of the National Council of Churches of Christ in the U.S.A., and are used by permission.  All rights reserved.  The Collect of the Day and the Psalm translations are from The Book of Common Prayer.  Commentaries are copyright © 2017 Epiphany ESources, 67 E. Main St., Hornell, NY 14843. www.EpiphanyEsources.com. All rights reserved. Permission is given to copy for congregational use with this attribution.
Posted by The Rev Michael W Hopkins at 9:36 AM