The Holy Name of Jesus 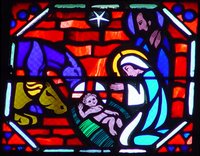 On the eighth day after his birth, according to Jewish custom, Jesus was circumcised and named.  We celebrate this event as “Holy Name Day” (in former editions of The Book of Common Prayer, it was called “The Feast of the Circumcision”). It is inconsequential that it is also the secular New Year’s Day.  Our Roman Catholic sisters and brothers call this day “Mary, Mother of God,” celebrating Mary’s role as Theotokos, “mother of God” (see The Book of Common Prayer, p. 864, the “Chalcedonian Definition.”

The Collect of the Day
Eternal Father, you gave to your incarnate Son the holy name of Jesus to be the sign of our salvation: Plant in every heart, we pray, the love of him who is the Savior of the world, our Lord Jesus Christ; who lives and reigns with you and the Holy Spirit, one God, in glory everlasting  Amen.

The First Reading:  Numbers 6:22-27
Our first reading is what is often known as the “Aaronic Blessing.”  It is Jewish custom (followed by most Christian translations of the Bible) not to use the divine name (Yhwh), but instead substitute “the Lord.” (You can tell when this happens when the translation renders “lord” in small capitals).  This blessing makes it clear that a blessing is primarily a wish for well-being.  What does it mean to “call down my name on the Israelites?”  Names are important in Hebrew thinking.  They contain the person’s identity and authority.  To “call down the name” is to totally identify with this God and live under his authority.

6:22 The Lord spoke to Moses, saying: 23 Speak to Aaron and his sons, saying, Thus you shall bless the Israelites: You shall say to them, 24 The Lord bless you and keep you; 25 the Lord make his face to shine upon you, and be gracious to you; 26 the Lord lift up his countenance upon you, and give you peace. 27 So they shall put my name on the Israelites, and I will bless them.

Psalm 8
Following on our first reading, this psalm opens and closes with an invocation of “the Name.”  It is said that this Name pervades the whole world. God is then praised in particular for the creation and humankind’s place in it, adorned with glory and honor (which is, of course, a gift from God).

The Second Reading:  Galatians 4:4-7
This passage from St. Paul contains the only direct mention of Jesus’ birth outside of the Gospels.  He does not mention Mary’s name (her name does not appear outside of the Gospels).  “The fullness of time” is a phrase that uses a Greek word for “time”—kairos—which we do not have in English.  It is a word that has nothing to do with “clock time” or “history.”  It is more like “when the time was right.”  Abba is an Aramaic word which is the equivalent of our word “Dad,” or even “Daddy.”  God now has for us a new, more familiar, name.

4:4 When the fullness of time had come, God sent his Son, born of a woman, born under the law, 5 in order to redeem those who were under the law, so that we might receive adoption as children. 6 And because you are children, God has sent the Spirit of his Son into our hearts, crying, “Abba! Father!” 7 So you are no longer a slave but a child, and if a child then also an heir, through God.

The Second Reading:  Philippians 2:5-11
Paul quotes to the Philippians what was most likely an early Christian hymn.  Jesus shows us how to live in his own self-emptying (kenosis in Greek) in order to fulfill God’s purpose for him.  One result of this style of life is the unity in humility that Paul is proclaiming to the Christians of Philippi.  The reference to Jesus’ name makes this a good reading for this feast.  Despite his self-emptying his name is remembered and highly exalted.  One recalls his own teaching, “The first will be last and the last will be first.”

2:5 Let the same mind be in you that was in Christ Jesus, 6 who, though he was in the form of God, did not regard equality with God as something to be exploited, 7 but emptied himself, taking the form of a slave, being born in human likeness. And being found in human form, 8 he humbled himself and became obedient to the point of death—even death on a cross. 9 Therefore God also highly exalted him and gave him the name that is above every name, 10 so that at the name of Jesus every knee should bend, in heaven and on earth and under the earth, 11 and every tongue should confess that Jesus Christ is Lord, to the glory of God the Father.

The Holy Gospel:  Luke 2:15-21
To tell the story of Jesus’ circumcision and naming requires only one verse, but we give it context with the latter part of the shepherds’ story and the “pondering” of Mary.  Jesus’ circumcision makes it clear that he was a Jew born of observant Jews.  They are also obedient to the angel Gabriel’s request that the child be named Jesus (actually, in Hebrew, Joshua).

2:15 When the angels had left them and gone into heaven, the shepherds said to one another, “Let us go now to Bethlehem and see this thing that has taken place, which the Lord has made known to us.” 16 So they went with haste and found Mary and Joseph, and the child lying in the manger. 17 When they saw this, they made known what had been told them about this child; 18 and all who heard it were amazed at what the shepherds told them. 19 But Mary treasured all these words and pondered them in her heart. 20 The shepherds returned, glorifying and praising God for all they had heard and seen, as it had been told them. 21 After eight days had passed, it was time to circumcise the child; and he was called Jesus, the name given by the angel before he was conceived in the womb.

The Scripture quotations (except for the psalm) are from the New Revised Standard Version Bible, copyright © 1989 by the Division of Christian Education of the National Council of Churches of Christ in the U.S.A., and are used by permission. All rights reserved. The Collect of the Day and the Psalm translation are from The Book of Common Prayer.  ommentaries are copyright © 2016, Epiphany ESources, 67 E. Main St., Hornell, NY 14843, www.epiphanyesources.com. All rights reserved.
Posted by The Rev Michael W Hopkins at 3:34 PM